The first player to collect five mythical creatures on their lawn wins!

To start, each player must set up their Fence, which will hold their Runes. Good Fences make good neighbors!

The area in front of your Fence is called your Lawn. Throughout the game, you will SUMMON Creatures onto your Lawn. Your Fence and your Lawn combined make up your play area.

Next, shuffle the Rune deck and deal three cards to each player. Add your three Runes to your Fence to keep them hidden from your neighbors. Place the remainder of the Rune deck next to the Main deck. Leave space to the right of the Rune deck for a Rune discard pile, where you will put used and destroyed Runes.

If either of these two decks run out of cards at anytime during the game, shuffle the corresponding discard pile and turn it face down to form a new deck.

The player with the most pets goes first. If two or more players are tied for the most pets, passive aggressively say things like "No, it's fine, you go first..". until someone actually goes first. Play proceeds clockwise.

Runes and Regulations has four types of cards:

Spell cards: Despite your fearsome powers of sorcery, your Spells are primarily used to protect your Lawn and annoy your neighbors.

You may CAST a Spell on your turn during your Cast phase. Spells have an immediate, one-time-use effect. To use a Spell, read its effect aloud, then move it to the Main discard pile.

Creature Cards: Your Creatures are your adorable (or sometimes not so adorable) pets. You may SUMMON a Creature on yourturn duringyour Summon phase.

When you SUMMON a Creature, it goes on your Lawn. Most Creatures have an effect. A Creature's effect can only be used when that Creature is on your Lawn and not when it is in your hand.

If this happens, your Creature loses its effect and you must place a shrub token on it to show it is hexed. A Hexed Creature is no longer considered a Mythical Creature.

Rune Cards: Your Runes are everyday household items inscribed with special symbols that imbue each Rune with magical power. Each Rune states a trigger.

You may choose to ACTIVATE a Rune any time its trigger occurs during the game, even if it is not your turn. To ACTIVATE a Rune, reveal it to all players and read its effect aloud, then move it to the Rune discard pile.

Always add Rune cards to your Fence and not to your hand. If at any time you have more than three Runes, you must immediately destroy one of your Runes.

Regulation Cards: A Regulation is a notice from the Homeowners Association about a new bylaw for the neighborhood. Each Regulation states a new rule that is added to the game.

Each turn consists of five phases:

You may choose to skip the Beginning of Turn phase, Cast phase, or Summon phase of your turn; however, you must take the turn phases in the specified order. If you accidentally skip one of these three phases during your turn, you cannot go back to an earlier phase.

For example, if you have already summoned a Creature for your Summon phase, you cannot go back and take your Cast phase if you forgot to CAST a spell.

You cannot skip your Draw phase or your Spin phase.

If your Spin result is Event, you must SPIN the Spinner a second time. An EventSpin result applies to all , not just the person spinning. There are six possible results:

Then, subtract all the creatures that were hexed, destroyed, or stolen from you. If this total number is three or more, destroy one Mythical Creature on your Lawn.

No effects can be used when a player discards to adhere to the hand limit.

By default, your hand limit is seven cards.

By default, your Rune limit is three cards.

The first player to complete their End of Turn phase with 5 Mythical Creatures on their Lawn wins the game. That player can now walk around the room and smugly gloat while each neighbor looks on with burning envy. Yay! 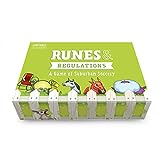