At Loxley Castle, the legal heirs of Robert were disinherited when Loxley died in the Holy Land. The siblings were outlawed after they did not leave their father's castle without a fight. Desperate and hunted by the Sheriff of Nottingham, they survive as bandits.

They are now forced to steal from the rich Norman lords and gather the ransom for King Richard. His return will finally mean peace and justice for the people of England.

The one who is first to collect the ransom will become a legend in the history books and immortal in the ballads of the Bards.

Troubled times have cursed England since the good and just King Richard the Lionheart was captured in the Crusades. He must trust in his faithful servants at home to raise the huge ransom that has been demanded by his captors.

Meanwhile, Richard's corrupt brother John has seized the throne and replaced the loyal Anglo-Saxons with his Norman vassals.

This is the true story of Robin Hood...

In Robin von Locksley, you aim to collect loot tiles with your Robin and sell loot collections of the same color.

Every field will give you a task to gather fame: You may fulfill the task, or you may spend one gold coin to pass it. Whoever first circles the racing track twice wins. Each player will try to stay one step ahead of their opponent. Every fame tile the players encounter as they move will present them with a challenge. â€¦ 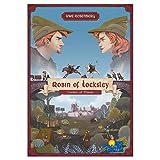