It's rhyme time with a triple twist. Listen to three consecutive clues and be the first to respond with three correct answers-that rhyme-to collect a card. Collect ten cards to win this tricky, triple-rhyming word race game.

With two levels of play, 600 questions, and game-changing "Steal" Cards, Rhyme Out is a super-duper, throw-you-for-a- looper fun family game!

Be the first player to collect ten cards. Players collect a card by being first to respond with the three correct rhyming words after hearing the clues.

Be the first player to collect ten cards and win!

When in doubt as to who answered correctly first, draw another card.

If no one answers correctly, the Reader is awarded the card. The card box is passed clockwise to a new Reader.

If two players answered at the same time, another card is read ONLY to those who tied. The Reader judges the winner.

The easier side of each card has a hint.

Collect one of these special cards, and you can steal from another player! You must use your Steal Card immediately. If no other players have cards, you lose the option to steal. Sorry!

Place all cards used in the game behind the unused cards at the back of the box.

Here are two ways to make the game easier. 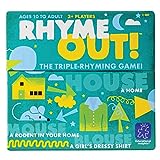