The foul forces of Darkmoor have amassed their legions to strike at Capital City, the greatest bastion of hope in the realm. Despite their well-laid machinations, one vital fact eluded them: the realm's legendary heroes had gathered together in Capital City to council the king.

Failing to topple the city, each dark lord's forces must flee back to Darkmoor, lest they be captured, or worse, by the realm's finest heroes.

In Retreat to Darkmoor, each player assumes the role of a dark lord with an identical deck of minions. Your goal: to successfully evade the Legendary Heroes and take refuge in the various monster havens of Darkmoor, with each monster that escapes counting toward control of a haven.

But beware of your so-called conspirators, as each player also scores points for eliminating rival minions!

Try to save as many of your minions as possible from the pursuing heroes by escaping to various locations in Darkmoor.

You'll score points for each minion who escapes and for controlling any locations by having the most powerful minions there.

You'll even score points for defeating your opponents' minions. The player who scores the most points wins!

C Player color: The color in this section denotes which player owns the minion.

D Type: Minion cards can be one of three types: beast, humanoid, or undead.

E Peril Value: This represents the ferocity of the minion. During the game, the peril values of a horde can trigger a Legendary Hero attack.

At the end of the game, the player with the most peril at a location will score the VP of that location.

F Ability: This describes the effect of the minion's ability. These abilities have one of two types: immediate and ongoing. Immediate abilities are resolved when the minion is played.

are relevant while the minion is in the horde zone. These effects may be continuously active or trigger when a certain event happens.

G VP Value: This is the amount of points the minion is worth during Final Scoring if it has escaped to a safe haven.

D Peril Threshold: This is the amount of total peril in a horde that will cause a Legendary Hero to attack it.

E Ability: This is the effect that the hero card has once it has been revealed. These abilities have one of two types: attack and ongoing. Attack abilities are resolved when the hero attacks.

are relevant while the hero is revealed or are triggered when a certain event happens.

C VP Value: This is the amount of VP the location is worth when a player controls it during Final Scoring.

D Ability: This is the effect that a location has on either the horde zone or how the location is controlled during the Scoring Phase.

These abilities have one of two types: ongoing and scoring. Ongoing abilities ((X) are relevant throughout the game.

Scoring abilities will affect which player controls the location during the Scoring Phase of the game.

On your turn, play a card from your hand, then check to see if the Legendary Hero attacks. Finally, draw back up to five cards in your hand. Then the player to your left will then take a turn.

The Golden Rule: The rules on the card always override the rules in these rules.

Play any card from your hand to the back of an existing horde, or to a location with no horde. A horde is a line of minions that starts at a location and goes backward toward the Legendary Hero

When you play a minion to a location without a horde your minion will start a new horde. If you can, you must trigger the ability of your minion based on where it was played, but you may play a minion in such a way that its ability cannot trigger.

Abilities can and will affect both your opponents' minions and your own minions, even if it is detrimental to you!

Many abilities affect adjacent minions. Minions can be adjacent both horizontally and vertically, but not diagonally. Cards do not need to be in the same horde to be considered adjacent.

If a card ability creates a gap in the horde, immediately close the gap by moving minions in the horde forward toward the location card until the gap is closed. Closing gaps is not considered movement for the purposes of cards that restrict or otherwise relate to movement.

Denice is first to play and she chooses to play her Scheming Familiar card. There is no horde yet at the Valley of Teeth location, so she decides to play it there.

The immediate ability of her Scheming Familiar card allows Denice to play another minion. She chooses to play her Dire Bear at the same location.

After Denice, Justin played his Charging Minotaur at the Valley of Teeth, adding it to the back of the horde and triggering the location's ongoing ability to give his Minotaur 1 VP token.

Stuart then played his Spotted Griffin at the Valley of Teeth, using its immediate ability to place anywhere in the horde and move Denice's Scheming Familiar to back of this horde.

As beast card, the griffin also gains 1 VP token from the location ability.

They add up the peril value of all minions at the location. It has equaled the hero Mad Malis's peril threshold of 6, which forces Mad Malis to attack this horde.

To resolve a Legendary Hero attack:

Remember: If a card ability creates a gap in the Horde, immediately close the gap by moving minions in the horde forward toward the location card until the gap is closed.

Again, closing gaps is not considered movement for the purposes of cards that restrict or otherwise relate to movement.

Mad Malis defeats the closest minion in the horde. Denice's Scheming Familiar is at the back of the horde being attacked, thus it is closest to the hero and is defeated. The defeated familiar is discarded and the VP token on it is discarded as well.

Because it is Stuart's turn and the defeated minion belongs to one of his opponents; Stuart gains a 2 VP token.

Then the players check Mad Malis's ability. It has no effect.

They then check the other horde's and resolve any of those minions' abilities. Finally, Mad Malis, having had his fill, is discarded.

Move the remaining minions in the horde that was attacked to other side of the location card. This area is called the safe haven. Minions in a safe haven can no longer be affected by the abilities of Legendary Heroes or minions.

Players collect any VP tokens and discard all peril tokens that were played on the escaping minions they own, then resolve any ongoing minion abilities that are triggered at this time.

Stuart's Spotted Griffin and Justin's Charging Minotaur are the only remaining minions in this horde.

Those cards are move the safe haven area of the Valley of Teeth location.

Stuart and Justin collect the VP tokens from their respective minions and there are no abilities to resolve at this time.

If there isn't a revealed Legendary Hero, reveal the next one.

If a Legendary Hero cannot be revealed, proceed to Final Scoring.

Draw until you have five cards in hand, and end your turn.

After the last Legendary Hero has attacked, move all minions remaining in the horde zone to their respective safe havens.

For each location, calculate the total peril value of each player's minions. The player with the most total peril earns the VP value listed on that location card. In case of a tie, no points are awarded.

Add together the VP values for all minions you own in a safe haven, the total VP value of all locations you control, and the value of all of your VP tokens.

The player with the most VP wins. In case of a tie, the tied player who would have taken a turn next wins. 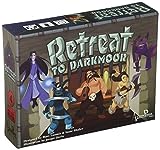