At the start of the game the spheres are arranged in the reserve area at the foot of the pyramid (Fig. A). The players draw lots for their color.

The player with the light color starts.

Players attempt to build a pyramid by stacking the 30 spheres. The aim of the game is to place the sphere at the top of the pyramid (fig. E).

The rules below enable players to keep as many spheres as possible. The winner is the player who has been able to keep the greatest number of spheres in his reserve area during the game so as to be the one to put on the last sphere or spheres.

Players must play when it is their turn. Players lose when they no longer have any spheres.

Each player alternately, puts a sphere from his reserve into any hollow which he has chosen. Stacking on a square

When one or more squares of spheres are formed on the board or at higher levels, a player can choose to stack one of his spheres on it; when it is his turn to play, he then has a choice between:

Square in the player's own color

A player who makes a square of spheres in his own color (Fig. C 1) immediately takes back either one or two of his spheres from the board and puts them back in his reserve (Fig. C 2);

He may recover any sphere belonging to him by picking them up from any level of the pyramid - including the one which he has just placed - except for those spheres that support other spheres.

(Making several squares of spheres in his own color by putting on one sphere only allows the player to withdraw one or two of his spheres).

In the same move it is possible for a player:

The winner is the one who places his last sphere at the top of the pyramid (Fig. E)

To start gradually, it is possible to play without using the rules for the «square in the player's own color « - only the rules for stacking allow the player to save spheres.

A player takes back one or two of his spheres which are on the board when he makes a square or a line in his color:To be valid, alignments must be on either the first or the second level. An alignment consists of:

A diagonal line is not an alignment.No more than two spheres can be taken back per shot. 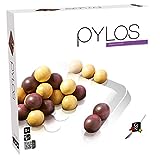