"Maias heart pounded. If she was wrong, the dragonling or its blood could kill her. If she was right, she had a fearsome ally in this impossible fight".

In this module, the dragonling appears! Perhaps it will aid Maia Strongheart in the arena. But the dragonling is an untamed beast that can create chaos if not kept under control...

Add the dragonling die to your dice pool, giving you nine dice instead of eight. Put the dragonling token into play. (There is a reference guide on the back).

After the timer has ended, you then determine how you will use the dragonling die result, based on the other dice you have rolled.

The talon, tail, or teeth result may be added to any set or single to attack an enemy card with the matching icon. However, the dragonling die does not count as a colored die. For purposes of color requirements, it counts as a white die.

The wing result may be used to prevent the battle marker from moving down for any one single However, the wing result does not prevent a situation that would cause an enemy to raise their shield.

The chaos result must be used to immediately reroll all colored dice, before resolving any attacks. This is mandatory.

Example: Enemy #3 requires two 3s, but Carter has only rolled a single 3. However, the enemy card has the tail icon, and Carter rolled the tail result on the dragonling die. Therefore, he can add the dragonling die to his single 3, making it a set of two 3s instead.

"The horse-drawn chariots encircled the combatants, hooves pounding the earth and stirring up clouds of dust across the arena".

In this module, chariots represent a new threat that Maia Strongheart must fend off - even as she deals with the normal six enemies assailing her from all sides.

Shuffle the deck of chariot cards. Reveal the top card of the deck and place it beside the encounter board, face up. Place the rest of the deck next to the revealed card, face down.

While you are rolling your dice, you can place dice on any chariot cards in play. Each chariot card has a specific die requirement: either a single die of a specific number or any two dice of equal number. Remember, you must do this while the timer is running!

Example: The revealed chariot card has this effect: "For every single, move that enemy's battle marker down one extra space this round". Preventing this effect requires placing two dice with the same number.

Carter is too engaged in trying to make sets, and forgets toplace dice on the chariot card. He has a single 3. When resolving his attack on enemy #3, he is forced to move the battle marker down two spaces, instead of one.

After advancing the dice on the exhaustion track, retrieve any dice from the reserve, adding them back into your dice pool. Then, reveal the top card of the chariot deck and place it face up next to the encounter board.

If there are now no dice on the exhaustion track, reveal another card from the chariot deck, placing it face up next to the previous card.

"Maia Strongheart's centuries-old ceremonial armor, said to have been crafted from the Wizened's iridescent green scales, was a pledge of support for the rising and setting Sun Queens: for her mother, the first matriarch of the Strongheart clan, and for her grandmother, Eva, who'd recently passed".

In this module, Maia Strongheart draws inspiration from her friends, as well as relics and legends of her people, as she battles her way through the Proving Grounds.

Module required for this card to be used. This card can only be used when the dragonling module is included.

Example: Carter has decided to play with the dragonling module. The inspiration card he draws is Dragonscale Armor. This card's power allows him to use the tail result of the dragonling die against any enemy - not just against those with the tail icon.

"The queens soldier lifted a gleaming metal shield, deflecting Maia's strike. Momentarily sent off balance, she spun to her knee as the soldier's weapon narrowly missed her shoulder".

In this module, Maia Strongheart's enemies will raise their shield any time that you resolve an attack that is unsuccessful. Shielded enemies become that much harder to defeat!

Place the six shield tokens within reach nearby.

When you attack an unshielded enemy with a set, but the dice are not the correct combination, the enemy raises their shield. Place a shield token on that enemy card. The enemy is now shielded against your future attacks, until you break their shield.

Example: Carter rolled four 3s, but unfortunately none of them are blue, which is requiredfor an attack on enemy #3. Since he rolled a set, but it is not the correct combination to attack, he instead places a shield token on the enemy card.

When an enemy card is shielded, if you attack them with a single, you break their shield. Remove the shield token, but do not move the battle marker.

When an enemy card is shielded, if you attack them with a set, whether it would normally score a hit or not, move the battle marker down one space on the battle track.

"The legend's many mysteries, both real and imagined, have ensnared the minds of conspirators, politicians, and wise counselors alike".

In this module, every time that Maia Strongheart defeats an enemy, another one of the conspirators reveals their identity and attempts to exert influence over the arena.

Shuffle the six conspirator cards into a single deck and place it above the encounter board, face down. Then reveal the top card of this conspirator deck, placing it face up.

Once all conspirators have been revealed, ignore this rule.

Sometimes a conspirator's ability is an immediate effect, and sometimes it will activate when you resolve your attacks.

Example: At the start of the round, there are two conspirators in play: Queen Brianna (6) and Fern Greenbush (4). Carter rolls one die, with a result of 4. This activates Fern Greenbush, who has this effect: "Choose an enemy and move their battle marker down one space".

"We have gathered at this irregular hour to bear witness. Let us all hope these insidious rumors and secrets are exposed by moon's silver glow or sun's first light".

At the beginning of each round, rotate the sun and moon dial so that Maia is facing an enemy card of your choice. You must rotate the dial each round. In other words, Maia may not face the same enemy card slot two rounds in a row.

After resolving attacks, return to the sun and moon dial any colored dice you gained in the previous round. Then, check to see which sun and moon effects take place.

Example: Carter decides to rotate the sun and moon dial to face enemy #2 this round. After resolving his attacks, he checks for sun and moon effects.

He scored a hit on enemy #2, so he chooses the green die from the sun and moon dial for use next round. But he rolled no 5s, so he moves the battle marker down one space on enemy #5. 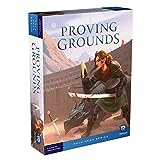