Feed the pig hamburgers until his belly pops!

Apply the stickers to the die as shown above

Close the vest and belt and push his arms down until they click. This is how to reset the game for a new round. Apply the stickers to the die as shown above.

On the bottom of each hamburger, you will find a number from 1 to 4. Insert the hamburger all the way into the pig's mouth.

Using two hands, one on top of the other, push down on his head the number of times indicated on the hamburger until you hear a click.

Each time you push down on his head his belly grows! Play continues with the player to the right

Note: The pig's belly will not grow if his head is not pushed down far enough to hear the dick.

If the die shows an "X" then the player skips their turn.

Example: The die shows red so you pick a red hamburger. The number 3 is on the bottom of your hamburger.

You feed the hamburger to the pig and push down on his head 3 times making his belly grow with each push!

The game ends when the pig has eaten so much that his belt bursts open and his arms fly up. The player who caused the pig to "pop" is the winner!

After the pig pops, push down on his head one more time to deflate his belly. Simply remove the hamburgers, close his belt, and push his amis down to start a new round.

Please do not pull on the pig's belly as this may cause the material to tear.

Pop The Pig New and Improved 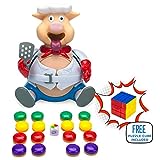