Be the first player to use all of your tiles in your Pivitgrid.

You will need paper and a pencil to keep score. Turn all tiles face down in the center of the playing area.

Each player draws 24 tiles, keeping the tiles face down. Leave the remaining tiles face down in the center of the playing area. Once all players have their tiles, one player says "go".

All players turn their tiles over and race to position them in their own crossword style grid matching either the designs or the colors on the tiles. The following example shows a grid during play.

At any time during the round, players may trade in up to two tiles. When trading a tile, a player should toss one of his or her trade tokens into the center area and say "trading".

The player should then place one tile from his or her hand facedown back into the mix of tiles in the center of the playing area and select a new tile to add to his or her hand.

Wild tiles may be used in place of any design or color tile.

Players may find they need to rearrange and regroup their tiles many times during a round in order to complete their grid.

The first player to use all 24 tiles in his or her grid takes the highest value scoring stick from the center of the playing area. The remaining players continue trying to complete their grids.

Should the first player discover an error in his or her grid while waiting for the remaining players to finish, the player returns the scoring stick to the center and tries to correct his or her grid.

There is no penalty for needing to return a scoring stick; however, the highest score for the round is now available to any player who successfully completes his or her grid first. As grids are correctly completed, the scoring sticks are taken by the successful players.

All grids should be verified before scoring (no two-tile rows or colums, and no duplicate colors or designs). If an incorrect grid is discovered, that player's scoring stick is passed to the player with the next highest value scoring stick who then passes his stick to the next stick holder.

The person who did not complete their grid or finished last, now has one minute to race the player with the incorrect grid for the remaining scoring stick. Use the timer to measure the additional minute of game play.

The first of these two players to correctly complete his or her grid claims the final scoring stick. If neither player completes their grid before the timer runs out, neither player scores.

Points are scored based on the value of each player's scoring stick. Every player receives 1 point for each unused trade token.

After the round is scored, all tiles are returned facedown to the center of the playing area and mixed with all tiles to prepare for the next round. Players should also retrieve their trade tokens if used.

The first person to reach a score of 24 is the winner.

To help younger players, you may choose to eliminate the rule that all rows and columns must have more than two tiles. Note: Using less than 24 tiles per player does NOT make the game easier.


If you have two tiles of the same design and the same color, place those tiles first as shown in the example below.


When playing with 2 players, you will not use the scoring sticks. Follow the rules for 3 or 4 players with the following exceptions:

Once a player has used all 24 tiles in his or her grid, the player says "done". The other player verifies that the grid is correct (no two-tile rows or columns, and no duplicate colors or designs).

If the grid is not correct, play continues without penalty. If the grid is correct, the remaining player has one minute to complete his or her grid. The timer should be started as soon as the winner's grid has been verified. Once the timer has run out, the round ends.

The player to complete his or her grid first scores 4 points plus 1 point for each unused trade token.

If the remaining player was able to complete his or her grid before the timer ran out, he or she scores 2 points plus 1 point for each unused trade token.

If the player was unable to complete the grid, the player scores 1 point for each unused trade token.

The first person to reach a score of 20 is the winner. 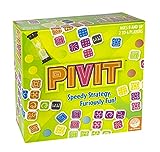