You are captain of a pirate crew on a quest for the most fabulous treasure: the Golden Pineapple. The map that leads to it has been cut up and scattered all over the Caribbean, but each location is an adventure waiting to happen.

Other pirates are also looking for the pieces of the map, so you must assemble the map first to win. Make the most out of your crew members, find the treasure, and become the most famous pirate of all time!

Pirate cards have either one or two pirate types (Here Parrot and Walrus). Adventure effects can be triggered when you play a type of pirate.

A pirate on a card that has only one pirate is called a Solitary pirate.

In Pina P'rata, you pit your crew members against those of the other players in a series of rounds. Your goal each round is to be the first player to end his turn with an empty Hand.

The winner of each round gets a piece of the treasure map.


Note: There are 10 types of pirates. Each card is a unique duo of two pirates, or a Solitary pirate. Each pirate is on 10 cards: 9 in a duo with each other pirate, and 1 Solitary.

Starting with the player to the left of the dealer, players take turns, clockwise.

In either case, your turn is over and the next player is up.

Example: It is Vincent's turn and the card on top of the Action pile shows the Tiger/ Rat duo.

Thus, Vincent can either play a card with a Tiger, or a card with a Rat. He decides to play the Tiger/Octopus duo. It is now Marie's turn to play and she must play a Tiger or an Octopus. Because she has neither, she draws a card.

At the end of your turn, if you have no cards left in your Hand, you win the round. The round ends immediately.

Draw the top three tiles from the Adventure pile, look at them, and pick one. Add it face-up next to the Adventure tiles already in play.

Put the second tile in front of you, with the Treasure Map facing up. You just found a piece of the Treasure Map! Put the third tile on the bottom of the Adventure pile.

You are now the dealer. Shuffle all the cards together, and deal 8 cards to each player (7 if there are 6 players). Place the rest face-down as the deck in the center of the table. A new round starts. The player to your left is the new first player.

Before each round, read the tiles carefully and make sure every player understands their effects. When in doubt, players should agree on a common interpretation.

Always resolve tiles from oldest to most recent. If you can't do everything an Adventure tells you to, just do as much as you can.

Note: In Treasure Hunt mode, there are never more than 6 Adventure tiles in play at a time.

If you win a round and 6 Adventure tiles are already in play, the tile you choose replaces one in play. Remove the replaced tile from the game.

There are two ways to play Pina P'rata:

In Cruise mode, play as many rounds as you want in a row, and add an Adventure tile at the end of each round.

When the cumulative Adventures make the game too confusing or complex (usually when there are 8), shuffle all the tiles together and start a new game.

You can add or drop players between rounds. When you're done playing, you can see who won the most rounds, but everyone who won a round is a winner.

In Treasure Hunt mode, your goal is to be the first player to reassemble the map and find the Golden Pineapple. During setup, give each player a tile that represents the first part of the Treasure Map.

Play as many rounds as necessary: The first player to collect three missing pieces of the Treasure Map wins the game. If you win a round in Treasure Hunt mode and 6 face-up tiles are already in play, discard one tile in play and replace it with one you just drew. 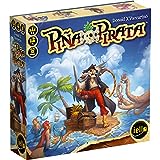