In Songbirds, you skillfully play bird cards from your hand to collect seeds and birds at the bird feeder. Seeds and bird couples in your collection are worth points.

Single birds only score if you have the most of their species. In the end, the player with the most points wins.

The course of play is the same for all numbers of players. The first player begins and takes the first turn. Each turn goes through the following three phases in this exact order:


Then the next player in clockwise order takes a turn. Play continues in this fashion until the game ends.


A. Playing a Card

Select a bird card from your hand and place it face up at a perch of your choice.

Always play your card at the end of a row. (Offset the ground cards so that they can be easily recognized as such).

Note: At the start of the game, there are no birds waiting in line.

Compare the birds on the ground with the bird at the perch.


The Total Is Greater

Go through the following five steps (multiple times, if need be):

Determine the difference between the two values compared. The difference determines the position above the feeder base from which you will get a seed card.

If there is a bad card next to the seed card (see phase C for how this can happen), you must also take the bad card and place it face up in front of you (for step 3). If there is no card left to take from the position you determined, you get nothing.

Slide the remaining face-up seed cards-as well as any bad cards-down towards the feeder base. Do not replace the seed card you took with another one from the deck just yet (but only at the end of your turn).

If you cannot draw a card from the feeder deck, because it is empty, you get nothing, triggering the game end.

Example: You have just added the greenfinch of strength 3 to the left row.

The difference is 7-5=2, so you take the second seed card from the feeder base (in the illustration on page 2, this would be the 3-point seed card), placing it in your score pile. Then slide the cards at positions 3 and 4 down.


2. Add a bird to your collection

Move the bird at the perch to your collection, placing it face up in front of you. Birds are kept in separate piles by species so that all players can clearly see how many birds of each species you have.

Important: Do not take the bird from the perch into your hand!

Carry out the effect of the face-up bad card in front of you. After resolving its effect, remove the bad card from play. If you did not get a bad card, move on to the next step.

The Crow scares away a bird in your collection. Remove a bird card that is face up in front of you from play. You must choose from the species you have the most birds of.

Move the highest-value bird from the ground to the perch. In case of a tie, move the bird closest to the perch from those tied. Close any gaps between the remaining birds on the ground, without changing their order.

Example: In the previous example, you move the chaffinch to your collection. The blackbird moves to the perch. If you played a greenfinch of strength 4 or more, that greenfinch would move to the perch instead.

Compare the new bird at the perch with the remaining birds on the ground.

If the total is greater again, repeat steps 1-5 (over and over again, if need be, until this is no longer the case). Otherwise, if the total is equal or lower, move to the "Drawing New Cards" phase of your turn.

Example: In the previous example, the blackbird is now at the perch. The total strength of the remaining birds on the ground is 3+1=4, which is greater than 3.

The difference is 4-3=1. You take the first seed card, placing it in your score pile, as well as the blackbird, adding it to your collection. The remaining two seed cards move down.

The greenfinch moves to the perch and is stronger than the remaining bullfinch on the ground. Phase B of your turn ends.


The Total is Equal or Lower

Instead, you may choose a bird card from your hand (from those remaining), adding it to your collection directly. The strength of this card must be equal to or lower than the strength of the card you just added to a row. (The species of the two cards do not matter).

Note: If you do not have a bird in hand whose strength is equal to or lower than the first one you played, move on to the "Drawing New Cards" phase of your turn without playing a card to your collection.

Therefore, you may add one of the remaining three bird cards in your hand to your collection, if its strength is 3 or less.

Draw back up to 4 cards and replenish the face-up seed cards.

At the end of your turn, draw back up to four bird cards in your hand.

You can draw cards from either the queue of face-up bird cards or the top of the bird deck. The queue is refreshed immediately after each card is drawn.

Make sure there are four seed cards above the feeder base by drawing new cards from the feeder deck and adding them face up to the column, if needed. Do not add any bad cards you draw to the column. Instead, form a second column-consisting of bad cards-next to the column of seed cards.

Assign at most one bad card to each seed card. Place the bad cards from bottom to top (as viewed from the feeder base), as you do with the seed cards, even if there is no seed card at a position (yet). If you draw a fifth bad card, when there are four bad cards in play already, remove it from play.

Example: At the end of your turn, there are two seed cards left, so you must draw cards from the feeder deck.

The first card you draw is a seed card of value 3, which you add to the top of the column.

Next, you draw a crow, placing it next to the bottommost seed card (of value 1). Finally, you draw another seed card so that there are four face-up seed cards again.

If the feeder deck runs out of cards when you are supposed to add seed cards to the column, the game end is triggered (see next page). Until the end of the game, there will be less than four face-up seed cards.

Note: Towards the end of the game, some positions may be comprised of just a bad card.

In step 1 of phase B, if the difference corresponds to such a position, you must take the bad card, without also getting a seed card.

The game end is triggered when you are supposed to draw a card from an empty feeder deck. Play continues until all players have had an equal number of turns, i.e., the player to the right of the first player will take the last turn of the game.

If that player triggers the end, the game ends at the end of their turn.

Each player now chooses two bird cards from their hand and discards them face down. Once all players have done this, add your remaining two bird cards to your collections and commence the scoring.

Score the cards in your collections as follows:

The player with the most points wins!

In case of a tie, the player with the most pairs of birds breaks the tie. If still tied, enjoy your shared victory. 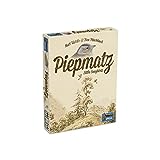