Everyone knows the cake rules: one person cuts, the other chooses. In this way, one makes the slices as equal as possible so that one does not end up with the short end.

But this rule does not apply to "piece o' Cake". Here a person can cleverly offer larger pieces to the others and still get the most in the end. 5 cakes with 11 slices of different varieties are divided.

Each variety awards a different amount of points. One can immediately eat slices to guarantee a number of points, or collect them in the hope of scoring bonus points for having the most of that variety at the end of the game.

Only skilled dividers with an eye on their opponents' pieces can score the most points and win the game.

The 57 cake slices are mixed and placed to the side in 5 face-down stacks of 11 slices each. The two remaining slices are placed face-down to the side as well. Every stack represents one of 5 cakes that will be distributed during the game.

A starting player is chosen and becomes the first "server". He serves and divides the first cake.

Serving and Dividing the Cake

The server takes a stack of 11 slices and places them face-up, forming a round cake, while keeping the slices in the same order as they were in the stack. In other words, the slices are drawn from the top of the stack and placed next to each other without changing the order.

Then the server divides the cake into, at most, as many pieces as the number of players. It is also not allowed during this time to change the order of the slices, but each piece may be made up of any number of slices, even a single slice.

There may also be less pieces than the number of players, in which case one or more players will not receive anything this round - including the server himself. With 2 players, the cake can also be divided into 4 pieces, with each piece chosen in alternating turns.

Now the other players take their turns in order: beginning with the player to the left of the server, each player may

Whoever chooses a piece must immediately decide for each individual slice whether he wishes to eat or collect it.

The player flips over the slice that he wishes to eat and places it face-down in front of him. A slice that has been eaten awards as many points as the number of dollops of whipped cream pictured on that slice.

Collected slices may be eaten later in the game if a player chooses to forfeit choosing a piece of the current cake. Collected slices award points at the end of the game only to the player or players with the most slices of each variety.

If a player does not have the majority of slices in a variety he has collected, these slices are worthless.

Example: Ottilie sits next to Mathilde and may choose the first piece.

She chooses the piece made up of 3 slices, below right

She flips over the strawberry cake to show that she is immediately eating the slice.

She eats the chocolate slice right away as well She collects the last slice in the hopes of scoring 9 points for having the most gooseberry slices at the end of the game.

The player who served the cake is the last to choose a piece or forfeit. Any slices that remain from the cake are removed from the game.

Then the next player to the left becomes the server and places the slices of the next cake and divides it. This continues until all 5 cakes have been served.

When all 5 cakes have been served, the game is over and the players score points as follows:

Each variety of cake that is face-up in front of the players is compared. The player who has collected the most slices of a variety receives as many points as the number on one of the slices of that variety (3-11 points).

This number also represents the number of slices of this variety in the game. The number of points rewarded for the majority in a variety is the same, no matter how many slices that player has collected.

If there is a tie for the most slices in a variety, every player tied for the majority receives the full number of points for that variety.

Every face-down slice in front of the players is flipped face-up. Each individual slice awards as many points as the number of dollops of whipped cream pictured on the slice (1-3 points).

For a longer game, players may choose to play multiple rounds, keeping track of the scores from each round on a piece of paper.

Whoever has the most total points at the end of the game wins the cake battle. Afterwards, the winner must take a long walk in order to work off all the calories. 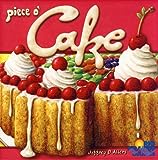