This game is also known as "Mikado".

Grasp the sticks loosely in one hand so that they flare towards the top, or lean from the center evenly as in the illustration. A successful throw depends upon the proper grasping of the sticks.

Open the hand quickly and pull it away quickly so that the sticks will not hit it in falling. If the sticks have been held and allowed to fall properly, they will land on the table radially, like the spokes of a wheel.

Any number may play as many rounds as are decided before the start of the game, or the one who reaches 500 or 1,000 first wins.

The sticks are tapered at the ends, and the easiest way to get one out sometimes is to press the end touching the table, providing no other stick is resting on it.

Practice will develop skill in the use of the Emperor in flicking sticks from the top of the pile. This often wins the game. -

This is excellent training in mental arithmetic for the younger people. 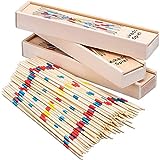