The Nanuks are determined - they don't want to become sitting "bears" due to global warming. Sourcing a supply of canned fish may be a way to survive the diminishing sea ice.

At least it gives them a very good reason to travel all the way from the North Pole to Germany, and party up with their doggie friends there!

Only the 96 animal cards will be used in the basic game. Put the other cards back into the box. Choose a player to be the dealer and do the following in order:


Players now say "GO!" (at the same time) to start the first round of the game.

There are five attributes shown on each card:

(5) Color of the background.

Players repeat doing this until one of them thinks that there is no appropriate Member card left that he could grab. This player immediately shouts "FREEZE!" and slaps the table. All players must immediately stop collecting Member cards, and proceed to the examination of cards.


Now the players check to see if the player who shouted "FREEZE!" really has no appropriate Member card to grab.


Then, all the collected cards of each player are checked. The Member cards have to be examined one after another in the order of collection and must always present no or only one difference when compared to the previous Member card.

At the beginning of a new round, each player receives a new face-down card from the draw pile as a starting Captain card. Then the dealer fills the gaps in the rows on the table with new Member cards from the draw pile.

If there are not enough Member cards to fill all the gaps, the last round is played with the remaining cards only.

The game ends immediately when there are not enough cards in the draw pile to deal each player a new Captain card. Players count the cards in their winning pile.

Each card in the winning pile is worth one point. Players score no points for the cards that they have discarded. The player with the most points wins the game.

After you have mastered the basic rules, add the special cards for more fun!


Variant 1 - Hold The Leading Player Back

The "hold back" card is brought into play after the first round.

The player who has just successfully obtained the most cards in the preceding round (including both the cards he has grabbed and, if any, the extra card for correctly shouting "FREEZE") receives the "hold back" card, placing it face-up in front of him. In the next round, this player is not allowed to grab a card that is identical to its previous card. If he has made a mistake, he has to discard all the cards he has collected during this round, including his Captain card.

If more than one player obtains the most cards in a round, no player receives the "hold back" card for the next round.

The "hold back" card may also be brought into play even before the first round. It is assigned to the winner of the last game, if you remember who the player was.

The Set-Up Delight turns the preparation of each round into a buzz of excitement!

At the beginning of a game, all the "bonus round" cards are shuffled into the draw pile. The dealer, when laying out Member cards on the table, is required to place them one by one.

During this, after at least 10 cards are already placed, if the topmost card of the draw pile shows the backside of a "bonus round" card, a bonus round is started!


Example: The "bonus round" card "goggles and an upright arm" is turned face up. A player shouts "Three!" correctly because on the table there are 3 cards showing a polar bear with goggles and its right arm held upright.

If more than one player shouts out the correct number exactly at the same time, each of them are awarded 2 points, indicated by either the "bonus round" card or any 2 animal cards discarded previously.

If there are not enough, resort to take any two animal cards from the draw pile or the middle of the table.

Any player who shouts out a wrong answer loses 2 cards from his winning pile, or places a "-2 points" card face up in front of himself if not having enough cards to lose.

(The "-2 points" cards can be turned over to indicate -4 points when needed).

When this "bonus round" card is revealed, race to count the number of cards showing a polar bear with...


"Pick-a-Polar-Bear" for a Single Player

You may also play this game alone. In a single-player game, the player aims to get as few negative points as possible. Deal 4 rows of 8 cards face-up, 32 in total, and choose any of these cards to begin the game.

As in the basic game, you collect cards with no or only one difference when compared to the previous card.

When there is no appropriate card left, you put aside the remaining cards. Then you set out new cards and continue the game by repeating the steps above.

This variation is not about speed but about the best premeditated selection of the cards to be collected. 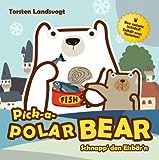