The goal is to score points by guessing the correct "password" from one-word clues given by a partner.

Each team is composed of one "A" player and one "B" player. The A's (two) sit side-by-side facing their"B" partners. A's use one holder between them and B's use the other holder.

The"A" word list is seen only by the A's; the"B" words only by the B's. The A and B players alternate as givers and receivers of the clue words.

The Password is always a single word, not hyphenated and not a proper noun.

After each Password is correctly guessed, the point value, as shown on the scoring indicator is recorded on the Score pad.

The player who guessed the Password scores the points, while the opposing player scores zero (0) for that word.

The game ends when Password No. 5 on the"B" list is completed. Add the point scores of "A" and "B" players of each team to find the total team scores.

The partners with the higher team score are the winners.


In this game, one player gives clues to two players who compete in guessing the correct Password. Use the same rules for clues and scoring as in the standard 4 player game.

The score for the round is written in the small box while the total is carried forward below it.

The team of Ron and Jake have WON the game. Their total score is 43 points, while Dylan and Sophie scored only 29 points. The "A" players, Ron and Jake scored as shown. Ron scored on words 2 and 4.

Dylan scored on words 1 and 5. The fifth word was guessed by Dylan when the ARROW was at position 6 on the indicator, so his score for that word was doubled, making it a 12 point word. 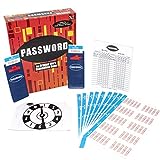 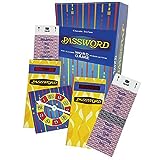