Place tiles on the board to create a line connecting your player markers.

The more tiles the line passes through, and the higher those tiles are stacked, the more points you will score!

Repeat the above steps for the two remaining edges. When this is finished, all players should have placed 4 player markers, one on each edge of the board.

Beginning with the first player, each player takes a turn, with play passing to the left.

On your turn, you must perform two of the following actions. You may perform the same action twice.

Take one of the three face up tiles and place it on the board, following the placement rules detailed in the following section. Then draw the top tile of the stack from which you took the tile, and place it face up next to the stack.

Choose one of your player markers and move it up to two spaces.

Jump over any occupied spaces you encounter.

At the end of your turn, you score points if there is a complete line between two of your player markers.

The first player marker can also be used to measure a tile's level.

If your two remaining player markers are also connected by a line, count how many passes the second line makes and add it to that of the first line.

Convert 9 passes to points on the score board, scoring a total of 4 points

Tiles cannot be placed in a way that would cut off one or more lines. Additionally, tiles can only be placed horizontally or vertically. Diagonal placement is not allowed, as it would result in lines being cut off.

Tiles placed on the second level or higher must be placed on two tiles of the same height.

Tiles cannot be placed in a way that would cut off one or more lines.

A tile cannot be placed on two tiles of differing heights.

A tile cannot be placed on top of a single tile.

If any of the following three conditions are met, the game ends when the player to the right of the first player finishes their turn:

The player with the most points at the end of the game is the winner.

The game ends immediately if all three stacks of tiles run out, or if a tile cannot be placed anywhere on the board. In the case of a tie, the player higher in the turn order wins.

For a more exciting game, impose a 60 second time limit on each players' turn. 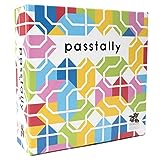