Each player receives four movers of the same color and place them on the home space e of that color.

One player then shuffles the deck of cards and deals four cards to every player including herself, she is now the dealer. The four cards are the player's hand for the following round. The remaining deck of cards is placed next to the board.

Each player trades one of her cards with her "partner" (see THE CARDS). The cards must be traded face down at the same time and without discussing what cards are in the players' hands.

Trading of cards will not have a huge significance to the game in the beginning, but as the game progresses the strategic value of the trade will grow steadily.

The player on the dealer's left side begins by playing one of her cards in the middle of the board to perform the action shown on the card. In order for a player to move her mover out of the home space and into the starting space, she must play a card with the

, no other player's movers can pass. This also goes for a partner's mover.

If a player is unable to play a card from her hand, i.e. because she does not have a card with the start symbol

, her only option is to put down in front of her all the cards in her hand without making a move and then wait until new cards are dealt when the round is over.

Note: You are still allowed to use the "trade places"-cards even if you don't have a mover in play.

When a player has played a card and made her move, the turn continues clockwise around the table.

However, if the opponent has two or more movers on the same space, it is the moving player's mover that is returned to its home space.

After all, players have either put down or played their cards, new hands are dealt to the players, and the players each trade a face-down card with her partner. Afterward, the game continues.

The dealer has to deal cards three times in a row before the next player gets to be the dealer. The dealer always collects all the cards in the deck, shuffles them, and deals four new cards to every player.

The game's objective is to get your movers as well as your partner's movers into the end zone. A mover correctly placed on a space in the end zone is "safe" and can no longer be moved.

Movers have to fill the end zone correctly by firstly ending in the innermost space, then second to innermost and so on until all four movers of the same color cover the designated spaces in the end zone.

If you play a card that exceeds the movement required for reaching the right end space, the mover must move back according to the remaining movement value of the card.


Note A: Your mover can only move back, if it is able to move forward into the end zone first, so if there is no open space in the end zone available "to turn your mover around", then it cannot be moved and the card cannot be played.


Note B: A mover cannot "jump" over other movers and fill spaces in the end zone. The end zone must be filled from the inner space and out.

The mover is moved according to the number of spaces written on the card.

The mover is moved from the home space to the start space.

The player, therefore, has to use the cards she is dealt to help her "partner" and try to prevent the opponents from getting all of their movers into their end zones.

The "partners" still trade a card every time new cards are dealt.

The first set of "partners" who are able to get all their movers into their end zones have won the game. 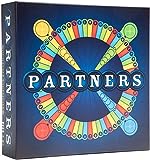