In Panic on Wall Street!, players are divided into managers and investors.

Managers offer for sale shares of companies they are in charge of for as much as possible. Investors attempt to acquire them for as little as possible in order to get the best return possible.

After two minutes of negotiation, a roll of the dice brings (sometimes drastic) changes to the economy, with major consequences for the balance sheet of each player.

After five rounds of play (5 months), the manager and the investor who have accumulated the most money are each declared victors, the undisputed Masters of Commerce.

The object of the game is to earn more money than any other manager by the end of the fifth round. Managers earn money by collecting the money from the shares bought by investors. Managers' expenses include management costs and the expenditures due to the expansion of their business acquisitions.

The object of the game is to earn more money than any other investor by the end of the fifth round. Investors earn money by collecting income from their shares of companies in which they've invested. The only expense of investors is the amount of money to be paid to managers for the shares bought.

Each player rolls the red die. The players with the highest rolls are managers and the remaining players are investors. Use the following chart to determine the exact division depending on the number of players.

Each player receives $120,000 from the bank in any denominations they wish. Each investor takes a bag of tokens from the investment bank they will represent.

Shuffle the companies and deal 3 to each manager (f a manager is dealt a " 2X income" company during set up, discard that company and hand that manager another tile).

Place the remaining companies in the box to form the company reserve. Managers arrange their companies in front of them in any way they like.

You're now ready to speculate and trade!

Each month (turn) is made up of five phases:

Flip the timer. For its duration, managers and investors negotiate the purchase of shares of companies for the month to come. There is no established order: any investor may freely negotiate with any manager and vice versa.

Negotiations focus on how much an investor is willing to pay to buy the shares of a company.

Once a manager decides on which offer (if any) to accept for a given company, he or she writes the agreed amount on the indicated space on the company tile. He or she then places an investment bank token from the new investing shareholder on the company in question.

Important : During the length of the timer, managers may renegotiate the sale agreement for shares as many times as they like and investors may withdraw from a company at any time.

For example, if an investor gets a better offer for a company that already has an investor, the manager can replace the investment bank token and write the new purchase agreement on the company.

Exception: companies with an investment bank token placed on its "closed" side (showing the word "CLOSED") may not be renegotiated that month.

When the two minutes are up, all negotiation must cease immediately; no further changes or deals may be made.

A deal is only valid when an investment bank token is in place and the purchase amount is written on a company.

Any deal that does not meet these requirements before the two minutes are up is void, even if an oral agreement has been reached between a manager and an investor.

Note that red companies offer the highest possible returns, but they are also the most experimental and thus the riskiest (those whose values can change the fastest). Yellows offer less risk than reds and greens have less risk than yellow. Finally, blues are the least ambitious of all and thus have the lowest risk.

During negotiations, an investor and a manager may agree to place an investment bank token on a company with its "CLOSED" side up.

If an investment bank token is placed with its "closed" side up:

Companies are closed for one turn only. All investment bank tokens are flipped back over to their normal position at the end of every negotiation phase.

Roll the dice and place each die on the matching color on the market shares fluctuation board. Move the indicator for each color according to the value shown on the corresponding die.

The red indicator moves down three spaces to the "-20" to the left of the board (an indicator cannot go more to the left or right than the shown values and does not loop around to the other end of the scale).

After having moved the indicators for each color, investors receive income from the bank for each company in which they have invested, based on the position of the indicator for that company color on the market board.

Companies with a "2x" produce double revenue (income or loss) for the investing shareholder (the purchase value and management costs are not doubled).

Investors receive income according to the amounts shown on the market board, not the number written on each company.

Each manager collects revenues from the sale of shares to the investors who have risked funds in the companies of their portfolio, according to the number written on each company.

Managers have the responsibility of collecting the revenue from the sale of shares. They must make sure no investor gets forgotten in the general hubbub!

Example: the manager who owns the companies above will receive $140,000 this month, as the investor from Colonial Bank will give him or her $60,000 for the yellow company (the "2X" does not multiply the amount of the purchase of shares by two).

If an investor cannot pay in full the entirety of their investment to a manager, that manager can force him or her into bankruptcy, which immediately eliminates the investor from the game.

But they can also attempt to make a verbal agreement with the investor that owes them money and earn the revenue from the sale of their shares at a later time. The investor will thus be able to settle their debts later and remain in the game. Either way, these agreements are non-binding: you'll have to trust each other!

Managers who cannot pay the full amount of their management costs must immediately sell properties to the bank until they can pay the costs for the companies they had at the beginning of the month. If this happens, each company is sold to the bank for $5,000.

Sold companies are returned to the reserve. If one of the companies sold had an investor, the bank token is returned to its investor

One randomly selected investor acts as auctioneer. The auctioneer randomly draws properties out of the reserve equal to double the number of managers minus one.

If there are not enough companies left in the reserve, simply put all remaining companies on auction.

The auctioneer then piles them up (face down) in front of him or her and begins with the first auction, for the first company tile, without revealing the others.

Each tile is offered to the managers through an auction. Whoever wins the auction pays the bank and adds the company to those they already own.

If no manager bids on a company, that company is removed from the game. The operation is repeated until there are no tiles left for that turn.

Companies with a "2X" produce double revenue (income or loss) for the investing shareholder. The "2X" applies only to the revenue of the investor, and not during the purchasing of shares or when determining the management costs.

The auction for managers is not held during the fifth and last month.

Once the auctions are over, a new month (turn) begins with a new negotiation phase.

You can keep track of the current month by checking off the space, in the upper left of the game board, after the company auctions are over.

The game ends after the Management Cost Payment phase of the fifth month.


Variant for 3 or 4 Players

When playing with three or four players, each player acts as both a manager and an investor. During the negotiation phase, a player may only purchase shares in companies belonging to other players.

If a player is forced into bankruptcy during the manager income phase from shares sale phase, he or she may no longer play as an investor, but he or she continues, however, to play as a manager.

If a player goes bankrupt during the management cost payment phase, he or she may no longer play as a manager, but he or she continues, however, to play as an investor.

At the end of the game, the player with the most money wins the game. In a 3 or 4 player game, there is thus only one winner.

Panic on Wall Street Board Game 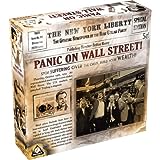