As you grow to become a stronger village leader you may collect items of great honor for your achievements. These are Feats and they grant special abilities for use in all of your future solo games.

At the end of any solo game, check all Feat cards to see if you have performed the minimum criteria of a Feat. If you have met all of the listed criteria, you have earned that Feat card and you may use it in future solo games.

All Feats start with their start marker (

) in the top left of their card. Once a Feat has been earned, rotate or flip it so that the unlock marker (

When using a Feat you have earned, orient the card so the unlock marker is in the top left corner of the card, and then place it at the back of the deck.

Some Feats work the same as standard buildings, while others have special rules that may limit their use in each game.

The 2-player game plays exactly like the main game except that play occurs simultaneously, in real-time. At the end of each round, when the round tracker card is revealed, players stop, waiting until all players have reached their round tracker, and then take cooperative (

Place the competitive cards or cooperative cards in a central area.

On-the-Go Tip: Have 1 player keep! these cards in their deck by placing;! the cards directly before the round;! tracker. When 1 of these cards is the [ I first card of their deck it marks the end of that player's round

In this mode, players must spend resources to prepare their island for various disasters. Choose a disaster from one of the cooperative cards (

) to play with and place it in a central location. The cost of a disaster upgrade scales based on the player count.

During each round, players act alone preparing and upgrading their village. At the end of a round, players may work together to pay a disaster's cost. This cost must be paid in full by any combination of players who pay the cost to advance it to the next level.

While setting up a cooperative game, players may elect to utilize 1 cooperative ability card (

). This card is available to upgrade at the end of a round similar to the disaster cards. Once upgraded, this enables a group power that all players can utilize during each round.

The cost for these abilities may cost building upgrades as well as resources. Check to make sure you have the proper number of upgrades and pay the cost to use this card's ability.

This is a casual competitive mode where players work to use their deck more efficiently than other players. The game begins with 1 player shuffling their deck and then reading out each card's number in the order set by their shuffle. Each other player arranges his or her deck to match.

), shuffle them, and draw 1 card at a time, discarding duplicates until you have 1 forest outpost, 1 sea outpost, and 1 mountain outpost.

At the end of each round, players may purchase these if they have met the criteria listed in the casual section of the outpost card. If a player has met these criteria, they take this card, rotate it 180°, and place it in their deck just after the round tracker.

If multiple players accomplish this in the same round, no players get that card, and it is returned to the box. At the end of the game, players add the value of any outposts they earned to their total.

After setting up, set aside any duplicates of villagers that are on any of the 3 selected outposts, then draw 3 random unique Villagers. Both players add copies of these Villagers to their deck between the core deck and the round tracker.

This mode is only recommended for players who know the game very well. The game begins with 1 player shuffling their deck and then reading out each card's number in the order set by their shuffle. Each other player arranges their deck to match.

) in a central area with 4 on top of the pile and counting down to 2. The first player to reach their round tracker card gets the privilege of purchasing 1 of the available Outpost cards before the other player. When purchased, the player rotates the Outpost card 180° and places it in their deck just after the round tracker card.

Players continue taking turns purchasing Outpost cards in the order they finished the round until no player can purchase any more cards. Once players are finished purchasing and ready, they begin the next round simultaneously.

Draw 3 random Villagers to use for the central pile instead of the Outposts.

) has Unique abilities. Recruit Villagers by paying their cost. Some Villagers have an "active" ability, others provide victory points for the end of the game.

Villagers that say Active has an effect for the round. At the start of a round, choose any number of Active cards you have already recruited to use for the duration of that round. When cards are recruited, they go right after the round tracker in your deck.

Once a Villager has been recruited, they stay in your deck for the remainder of the game. "Active" abilities may be used each round without paying their cost. You may recruit as many Villagers as you can afford.

Villagers may be used in solo games by adding 3 random Villagers between the primary deck and the round tracker.

Use additional copies of the game to play with more than 2 players. Follow the normal instructions for a 2-player game. If using Villagers in speed mode, add 1 additional Villager for each additional player.

Compare your scores to the charts to the right to see how your island measures up.

Easy: Use any number of Feats.

Medium: Use 1 Feat for each game.

Hard: Use no Feats.

Feats can be used to gain new Feats. However, using Feats earned on easy when playing medium is not as impressive as earning them on medium. 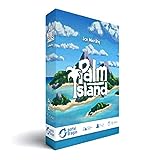