The party chooses which order to resolve the encounters. A number of other changes are necessary, as well.

A four player game requires two sets of One Deck Dungeon, and the following changes to rules:

In addition to damage and time, Forest of Shadows challenge boxes contain poison (

) icons. If not covered, a poison icon causes a green poison token to be placed on a hero.

Poison is not damage. It builds up slowly and can become very dangerous if not dealt with. Each time the party takes an explore turn (and at the start of every boss round), they must Resist Poison, by rolling any one die.

to the card title. For each leaf on an open door when the party resists poison, add 1 to the roll. These represent antidote herbs scattered around the forest.

Several effects call for a die or token to be exiled. An exiled die or token is placed in the game box, unavailable for the remainder of the game.

You can mix cards from One Deck Dungeon with Forest of Shadows to create a hybrid encounter deck. Use 22 cards from each, specifically all the cards with a (

) next to the card's title. Use the Hybrid Dungeon side of the Resist Poison card, which changes success to no longer remove a poison token.

You can freely mix heroes from different sets. When selecting a dungeon, it should match the cards in the encounter deck. With a hybrid deck, you can use any dungeon.

For a 4P hybrid deck, mix all 44 cards from each of the two different sets together. Note that there will be only 8 poison tokens available in a 4P hybrid game.

When using the Turn Reference with the Cure potion, the party begins the game with one Basic Potion type available. Choose any one of the four on the card, and tuck it under the Cure potion during setup.

Some Peril encounters have an arrow next to each choice, one with 'Item' and one with 'Skill' inside, pointing at that edge of the card.

As part of the Kickstarter campaign for Forest of Shadows, we've created some companion mini-stories and events that you can use while playing the game. It will direct you on what order to explore dungeons, and add some special rules. 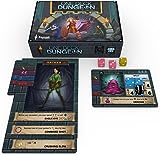