On a Scale of One to T-Rex Game Rules The goal of the game is to earn the most points by matching cards with other players.

For your first game, we recommend searching through the three piles and putting "Be a T-Rex", "Flex your muscles", and "Draw a circle in the air into the Play Area.

The different symbols on the corners of the cards are there to help our friends who are color blind.

2 Shuffle the number cards (rectangular cards), and then deal one face down to each player. Put the remaining number cards face down on the table. this is the draw pile.

3 Put the good tokens and bad tokens into separate piles in the middle of the table according to this chart:

4 Leave any extra tokens in the box bottom. Place the empty Box Top in the middle of the table.

The three face-up Action Cards in the Play Area describe ridiculous actions that players will perform.

All players secretly look at their Number Card and note the color. The Action Card that matches your color is the action you must perform. (If you were dealt a Swap Card, shuffle it into the deck and draw again - more on Swap Cards later).

The value on your Number Card is between 1 and 10 and indicates the level to which you must perform your action.

For example, if these are the Action Cards...

and your Number Card is an orange 6...

...then your task is to be aT-Rex at level 6 out of 10. How you interpret this is entirely up to you.

This is not charades! Talk, yell, roar, and dance all you want. We're not the boss of you.

First Time Players: To get used to the levels, pick a player to demonstrate a level 1 T-Rex. Then go around the table with each player acting out increasing levels of T-Rex until you reach 10.

There are no turns in this game. Everyone will be performing their actions simultaneously.

HEY two players! Continue reading "TWO PLAYER MATCHING CARDS" on the other side of the instructions.

To earn points, watch the other players as you all perform your actions simultaneously and try to find someone you suspect matches the value on your Number Card.

When you suspect someone is a match, present your Number Card to them FACE DOWN.

After watching you, if the other player agrees you might be a match, they'll also present their Number Card to you FACE DOWN.

When both cards have been presented, turn them over simultaneously to see if the values on the cards match.

If a player presents a card to you and you don't think you're a match, just ignore them and keep playing.

Only the card value matters for a match, not the action (e.g. If you are acting as a level 6 T-Rex and you think another player might be performing "Flex your muscles" at level 6, you should try to match with that player).

Matches can only be attempted between two players. Three or more person matches are not allowed.

When two players turn over their cards to see if they match, there are three possibilities:


In all cases, players discard their Number Cards into the Box Top in the middle of the table and take the Reward or Penalty listed above into a Personal Score Pile in front of them.

Then each player draws a new Number Card from the Draw Pile and continues playing.

Mixed in with the Number Cards are Swap Cards.

When you draw a Swap Card:

If an Action Card is swapped out while you're performing it, you can either continue with your action or switch to the new one.

If you were dealt a Swap Card as your first card, shuffle it into the deck and draw again.

If you can't find a match or you just don't want to perform your action, you can always discard your Number Card into the Box Top and draw a new one without penalty.

You can do this as often as you'd like, but you will be wasting your time while others are earning points.

If you end up running out of cards in the Draw Pile, pause play, then reshuffle and continue playing.

The game is over when either pile of Tokens (Good or Bad) in the middle of the table runs out. If the final match that depleted the pile requires extra Good or Bad Tokens to complete, take these Tokens from the box.

Calculate the points in your Personal Score Pile. The player with the most points wins!

It's super important to remember that when you're trying to match cards with someone, you're only trying to match the values on your cards. You can match with any action even if it doesn't match your own.

We Repeat - Don't Just Look For Other T-rexes!

Yeah, we know we already told you all of this, but you weren't really paying attention. You figured that if it was really important, someone would tell you again. 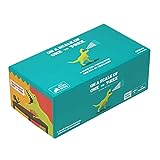 On a Scale of One to T-Rex