The Okavango River is almost dry and the animals on the African savanna are practically dying of thirst!

As a Ranger in the nearby wildlife reserve, you have the important task of forming strong herds of animals and leading them to a delta of the fertile river or to one of the sparse waterholes.

As a Ranger, do you have it in you to restore the natural balance and win the battle for drinking water? The animals are counting on you!

Each player is an African Ranger. The Rangers are awarded points for leading their herds of animals to the river deltas and waterholes of the Okavango. But there are only a limited number of waterholes.

The Rangers, therefore, need to be smart about gathering their animals into herds and allowing them to drink. The player with the most points at the end of the game is the winner!

There are total of 11 areas where animals can drink: 8 waterholes and 3 river deltas.

The player who has most recently seen a lion starts the game. The player to start places the cardboard African mask in front of him or herself making it clear who started the round. The game continues clockwise.

The Ranger whose turn it is, places either several animals from his reserve that are the same OR several that are different, in front of themself on the table. The Ranger can also choose to pass.

When the Ranger decides to play, he does so in 3 phases during his turn:


Phase 1- Allowing your Animals to Prink

Now that there is space to drink, the Ranger brings a new herd from their reserve to the empty waterhole or river delta.

Note: Animals that have quenched their thirst may not drink again in the same area. The Ranger always takes these animals back to their own reserve.

Waterhole: The Ranger must replace the drinking herd with the same number OR a higher number of animals of a single kind.

If the Ranger brings the same number of animals, the thirsty animals must have a higher ranking than the animals already drinking at the waterhole.

If the Ranger brings a higher number of animals, the ranking doesn't matter.

River delta: Here the Ranger has to replace the drinking animals with different animals AS WELL AS a higher number of animals than at the river delta at that time - the animals' ranking doesn't matter.

The African mask indicates the number of points to be earned for each waterhole or river delta.

A record is kept of the number of points for the Ranger on the scoreboard.


Examples of occupying a waterhole worth 6 points:

Examples of occupying the river delta with 5 fields:

A: When preparing the game, 1 animal is placed on the first field of this river delta - in this case a monkey.

B: The first Ranger takes the monkey and places a gazelle, elephant and rhinoceros at this river delta. They earn 3 points for doing so. This is because all the white fields are occupied. The Ranger places the monkey in their own reserve.

E: All the fields are now occupied and the animals are placed back into the bag (hidden stock) and the river delta is turned over because it is depleted. This river delta cannot be used again during the game.

Phase 3: Taking the animals from the Okavango to your own reserve

The following rules apply when taking animals from the Okavango (= visible stock) to your own reserve:


Once you have brought the animals to a waterhole during phase 1, animals can only be taken from the Okavango if:

Once you have brought the animals to a river delta during phase 1, animals can only be taken from the Okavango if:

The Ranger has just played 3 giraffes.

The following animal and Ranger cards are at the Okavango (visible stock).

The Ranger may now take 3 zebras from the Okavango because they have a lower ranking than the giraffes.

They may NOT take the 3 elephants because they are higher ranking than the giraffes (and there are just as many).


He can only take one ranger, irrespective of however many are available.

The Ranger places the animal card(s) or Ranger card taken from the Okavango in their own reserve (i.e. behind the screen).

Topping up the Okavango: The animals at the Okavango are topped up using cards from the bag (hidden stock) until there are 13 pieces after the Ranger's turn, for as long as stocks last.

If players cannot or do not want to do anything during their turn, they have to pass. In such a case, the Ranger takes 1 card from all the available cards at the Okavango; even if there are more than 1 of these animals in stock.

Following this, the Okavango is stocked up again to 13 pieces with a card from the bag (hidden stock) for as long as stocks last.

When the Okavango is empty as well, the third phase is scrapped: 'taking the animals from the Okavango to your own reserve'. Play continues.

A Ranger card (ranking of X) serves as the joker. This card can, therefore, be used to represent any animal. Several Ranger cards can be played during a single turn.

During their turn, a Ranger can exchange a Ranger card at a waterhole or river delta for the animal it had been used instead of. You may only exchange 1 Ranger card (joker) during your turn.

The Ranger may decide whether to immediately use the Ranger card during their turn or whether to take it to their reserve to be used during a later turn.

The game ends once all the white fields are occupied. Any player who has not yet had a turn during this round may still play one turn.

The game ends after this. The Ranger with the most points at that stage wins the game.

Tip 1: Very few animals drink at the waterhole in the beginning. It makes little sense to replace a small herd at this point with a much bigger herd.

You'll need this later! For this reason, always try to keep at least 10 animals in your reserve for as long as possible. 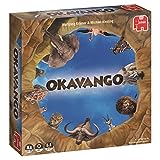