In the year XII of his reign, the king Akhenaton organized a sumptuous celebration for his wife NEFERTITI in honor of their wedding anniversary.

He ordered members of the Egyptian nobility to find rare and precious gifts throughout the various markets of Egypt.

The players represent Egyptian nobles who, eager to earn important political positions through royal appointment, send their servants out to collect gifts that will be presented to Akhenaton.

The pharaoh will award prestige points based on the gifts' originality. The player who earns the mostprestige wins.

Players purchase these Gifts at the markets, and they are worth prestige points during the final scoring. Each Gift card has the following information:


The Markets (on the Gameboard)

The markets are where players can buy Gifts. Each market has two different stalls (one on the left and one on the right), with different bid values and closing conditions; only one stall is open at a time with the other stall being covered by the market Reserve.

Each market has the following information:

In the example, the market closes and the Gifts can be purchased as soon as the combined bids of the servants reach a total of 17or more.

The players take turns clockwise. During their turn, a player may play a Character card, then must place one of their Servant pawns on a "bid square" in one of the three open markets.

One player may have several Servants in the same open market.

If the player no longer has any Servants available, they choose one market that already contains at least one of their Servants; that market is immediately declared closed.

This action replaces the placement of a Servant.

The players may now resolve the bids made by each Servant in order to buy the Gift cards.

Each Servant's bid corresponds to the value of the square where they stand. The Servants with higher bids are resolved before those with lower ones.


1. For the servant who made the highest bid

The player who owns the Servant must pay as many Deben as the value of the win- ning bid. The player places the coins in the Reserve of this market: these coins are added to any Deben that might already be present in the Reserve.

If this player doesn't have enough money, he or she pays nothing, but out of shame, must discard a Gift card previously acquired (this card is removed from the game). If the player has no Gifts, the turn is simply passed. Nevertheless the following servant is not considered as the highest bidder.

In any case, the player removes their Servant pawn.

(only for the player whose Servant made the highest bid)

"Single Card" symbol: The player may take only one Gift card (either with or without a Royal Seal).

"Extra Card" symbol: The player takes one of the 3 Gift cards without a Royal Seal as an extra card after buying the normal one or two Gift cards.


2. For each other servant

In descending order of bids, each player with a Servant in this market chooses one of the following two actions:

In any case, the player then removes the Servant from the market.

At any time, a player may exchange 1 Gold Deben for 2 Silver Deben.

Throughout the game, each player must keep their Deben and their Gift cards visible.


3. Once all Servants have been removed from the market, the market is closed


4. Prepare the previously closed market (from which the "Market Closed" tile has just been removed) for new business

As a memory aid, the ankh shaped pawn may be taken by the player who causes the closing of a market.

Once the market is settled, the player to the left of the one holding the ankh takes the next turn.

If the Akhenaton card is drawn while placing Gift cards in a market, this market is permanently closed (turn its Reserve at an angle to indicate this).

No other market will reopen for the rest ofthe game. Continue to place Servants until the final two markets are closed.

Once these two markets are closed, proceed to the final scoring to finish the game.

Once the Akhenaton card is revealed and all of the markets are closed, the game ends. The players now present their Gifts to Akhenaton.

The winner is the player having accumulated the most prestige points.

In the event of a tie, the tie is broken by the player having kept the most Deben, who is declared the winner. 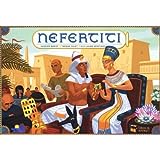 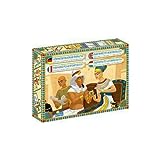