Undertaking the trip of a lifetime aboard such a luxurious carriage might be intimidating at first. Hopefully the tips that follow will help you navigate through the often arrogant and occasionally disdainful atmosphere of the Mystery Express and its extraordinary cast of characters!

Until players feel they truly belong to the small clique of old-timers aboard the Mystery Express, it is recommended that they take advantage of the Special Power associated with each of the five characters offered with the game. Each has a distinctive personality and corresponding unique Special Power, giving him/her an edge over fellow passengers.

Before beginning your journey, make sure you familiarize yourself with the layout of the train by looking at the summary of each of the Cars' action(s) provided on the inside cover of your Ticket wallet.

Now look at your Character token, and make sure you place its power face up in front of you. Once per turn you will have a chance to use the unique Special Power available to your character, as indicated on the cover of your deduction notebook.

To make sure you do not use your Special Power more than once during the same turn, turn your Character token over as soon as you have used its Special Power.

When the train arrives in a new city simply flip the token back to enable your Character's Special Power again.

Four of the five Characters (Colonel MacDouglas, Contessa De Mirabella, Doctor Strauss and Archibald Mansard) have a Special Power that is directly associated with the Crime cards whose back matches the color of the Character's miniature.

Once per turn the Character may peek at a Crime card of that category that another player just placed atop his discard pile.

The action takes place immediately when the player places the card atop his discard pile, so your Special Power is put in use during that player's turn, not during your own. Once you have taken a peek at the card, place it back onto its owner's discard pile.

This Special Power usually allows you, even if you happen to be a relatively inexperienced beginner, to quickly identify the missing Crime card for the category associated with your own Special Power - even if you haven't seen that many cards of this type during the course of the game.

The fifth Character, Miss Pransky, has a Special Power of a different sort: Every turn, she has 1 more hour than indicated on the itinerary (and thus, 1 more hour than any of the other characters) to take actions with.

This allows Miss Pransky to take some of the most time-consuming actions, such as conversing with one of the new passengers in the Club Car, and usually goes a long way toward helping her narrow down her suspicions.

Keeping track of what you see

How you will encode the information you see and gather on your deduction sheet has a major impact in moving your investigation forward.

As such it is critical that you pick a way to clearly differentiate a Crime element you have seen twice during the same turn (such as the 2 Hanged cards) versus seeing it only once.

Of course, you must be careful to correctly make note of the leg of your journey during which you saw each card; otherwise you risk coming to the wrong conclusions...

It may also prove useful to keep track of who owns a card in a given turn. Unless that player has both identical cards in hand (unlikely), there is a great chance that if he shows you the same Crime element again during the next leg of your trip it may be the exact same card he showed you the previous time.

Since the simplest way to rule out a Crime element with certainty is to see both copies of that Crime card during the same game turn, try to focus on a certain category of Crime card/color during a turn.

This way you will maximize your chances of seeing all the pairs of identical cards in this category in one turn.


The Hour of the Crime

Instead, we recommend you focus on a different aspect of each card (such as the position of the hour hand) during each different showing of the Time cards.

Remember that there are 3 identical copies of each Time card. You are trying to find the one that is present only twice in the deck. 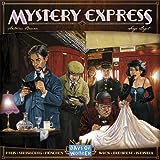