You'll skillfully place stones, bushes, ponds, and pagodas on multiple levels within your garden to become the best garden designer of the season.

"Miyabi" is Japanese for "elegance", "grace", or "refinement".

The game takes place over several building rounds. During a building round, you'll take turns designing your own Japanese style gardens.

The number of building rounds is determined by the number of players and is noted on the scoreboard.

At the start of each building round, each player places their lanterns above their game board.

The number of garden tiles that you need per building round differs depending on the number of players.

How many tiles of each type can be found on the info card.

Take the appropriate number of each garden tile type (single, double, triple corner, and triple straight) from the box and place them face-up in the center of the table.

Each Player will take up to 6 turns each building round.

The youngest player is the start player and receives the bonsai tree for the first building round.

On your turn, you will either select and place a garden tile , or pass if there is a not a tile you can play. If you place a tile, you will place a lantern and then score points.

Then the next player in a clockwise direction will take their turn.

The current building round ends after all players have either:

Garden tiles that were not used in this building round are removed from the game.

The bonsai tree is passed to the next player, making them the start player. Then, the next building round can begin.

The game ends after the last building round. Now it's time for final scoring. Points are given for the most objects in each row.

Each row is scored individually:

These players move their scoring stones forward by the appropriate num- ber of fields. All other players receive no points.

If there is a tie for the most objects, all tied players receive the higher score. In this case, however, there are no points awarded for the player(s) with the second most number of objects.

If there is a tie for only the second most number of objects, all tied players receive the lower score.

Now everyone adds up the value of their two scoring stones. Whoever scores the most points wins! The winner is the best gardener of the season. Tied players share their victory! 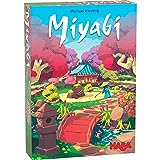