The game will last for 6 rounds. Each round consists of 3 phases: "Draw Phase", "Action Phase" and "Taxation Phase". Players will draw tokens to refill the market board during the draw phase, and each player will perform 2 different actions in the Action phase. Once all players have completed their actions, one company will be taxed, and then players start the next round.

Each player will have two turns during a round, but the turn order can change every round.

Players take turns in the order of their player markers on the turn order track. It's possible a player will take two actions in a row.

Starting from the owner of the leftmost marker on the order track, players will take turns performing 1 action of their choice. There are 2 different actions, "Buy shares" and "Build tracks", in this game, and every player must do each action once per round.

Whenever you take an action, you have to remove the corresponding action tile from your Profit Board to show it is used, and cannot be chosen again.

On your turn, first take your marker and use it to replace a disc of your choice on the market track. Then you use the disc to do one of the following actions, Invest or Build, and then the next player on the order track takes a turn.


Buy shares from the company

This represents that you have bought stock from the chosen company, and will track the relative earnings of each separate stock when it is moved.

Example: The leftmost marker on the order track is orange, so now it is the Orange player's turn. Both of his action tiles are still on his Profit Board.

1 He decides to invest in the Red company, so first he removes the invest tile from the board.

2 Then he takes his order marker on the left and uses it to replace a red rail disc on the market track, and puts it on the "0" space of his Profit Board.

His turn ends, and now it is the Purple player's turn.


Build tracks for the company


If the chosen disc has no legal hex to be placed on the map (the company is completely blocked off), then you must place the disc on its frame, and count it as a loss for this company. Decrease the relative value of all stocks of this color by 1.

You cannot place the disc on the frame when there is a legal hex on the map.

Example: 1 It is the Purple player's turn, and she chooses to build tracks for the blue company. 2 She takes her marker and uses it to replace a blue disc on the market track. 3 Then she takes the blue disc and places it on an empty hex adjacent to another blue track on the map.

Since she placed it on a "Farmland" hex, all blue stocks will increase in relative value by 2. The Orange player has 1 blue stock, and the Purple player has 2 blue stocks. 4 Move all 3 blue stocks 2 spaces in the positive direction.

After all players have taken 2 different actions, there will be 1 unchosen company disc on the market track. This company will be taxed and their earnings will be secured.

Example: Al players have taken 2 actions, so now the remaining company on the market track gets taxed. 1 A white disc remains, so it is moved to the taxed area.

2 Al player markers to the right of the empty space are moved 1 space to the left. The player order of next round is Green, Black, Orange, Green, Purple, Purple, Black and Orange.

The game ends after 6 rounds. All spaces of the taxed area will be filled, and all discs will be drawn from the bag.

First, you remove stocks due to taxation status, and then all players will add up the relative value of their remaining stocks to see who has made the most profit.

Since players will take 1 invest action and 1 build action every round, at the end of the game each player should have exactly 6 stocks on their Profit Board.

The player with the highest total profit wins the game.

In case of a tie, the player with the most valuable stock (higher relative value) wins. If there is still a tie, then compare the 2nd valuable stock and so on. If all stocks have the same value, then players share a combined victory.

Finaly, al players add up the relative values of their remaining stocks, Orange's total profi t is +11, Purple is +7, Green is +6, Black is +10. The Orange player wins the game. 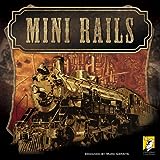