Remove the parts sheet from the instructions by tearing along the perforation.

Carefully remove the card divider from the parts sheet. Discard the cardboard waste. Apply the labels from the label sheet to the die. It doesn't matter which side gets which label as long as each side has one and they are somewhat straight. When you're done, discard the used label sheet.

A. Select the Category Group

On your turn, roll the die. This will determine which category group you'll use.

The category groups are:


Now everyone orients your writing cards so the correct category group is on top. Put your answer sheet on the card and you're ready to go.


B. Draw a card and Rank the Names

The player who rolled the die draws a card from the box. You can draw from whichever deck you'd like.

The names on the cards should be familiar but if they are not, feel free to ask the other players for hints. Once you've figured out who everyone is, it's time to rank them.

Secretly write these names down on your answer sheet under the correct headings.

At the same time, all other players write down on their answer sheets what they think YOU are going to write down. As they do this, they should remember... this isn't about them - it's all about YOU.

After everyone has written down their answers, you reveal who you married, who you dated, and who you dumped.

You, as the player whose turn it is, get 2 points for every player who matched you exactly (meaning they listed the three people correctly under each heading). Everyone else scores 1 point for each answer they matched correctly. This will give them 0, 1 or 3 points (trust us when we say they can't score 2).

For example, let's say there are 5 players. Two match you exactly. They get 3 points each and you get 4 points (2 points for each complete match). Another player gets 1 right, so she gets 1 point.

And one player completely blows it getting nothing right and getting no points. Each player writes down his/her score on the answer sheet. When you are done scoring, place the card at the back of the corresponding card deck in the card box.

After scoring, it's the next player's turn. Passing to the left, the next player takes the die, rolls for a new category group and draws a new card. Play then proceeds as before.

The game is over after every player has had 2 turns. The player with the highest score at the end of the game wins.

In case of a tie, have the tied players each take another turn. If it is still a tie, call it a tie and share the glory. 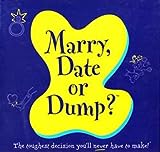