Knock Your Blocks Off is played over a series of rounds. Each round is made up of two parts: a Building phase and a Destruction phase.

During the Building phase, players simultaneously roll their building blocks and each builds one structure, matching up colors on adjacent blocks.

The first player to finish and place his crown block on top grabs the Demolition die from the center of the playing area. Once all players have finished their structures, and placed their crowns, the phase is scored.

During the Destruction phase, players take turns attacking another player s structure. The Demolition die may be flicked, tossed, or dropped in an attempt to knock the players crown off the structure. Each structure gives its builder an advantage for attacking or defending. Victory tokens are awarded after each attack.

To begin a round, one player says, "Ready, Set, Build!" Then, all players simultaneously roll all six of their building blocks like dice and race to build any one of the five structures detailed on the Structure Guide:

If you are the first player to finish your structure, place your crown block anywhere on top and then grab the Demolition die from the center of the playing area. The other players should continue to build, placing their crowns on top when finished.

Once you have finished adjusting your structure, you may then grab it again, if still available.


Check All Structures for Mistakes

Next, each player should check the other structures for mistakes. Any mistakes on the builders side of a structure will show up on the opposite side for the others to see.

If any mistakes are spotted, the builder does not have to rebuild his structure but forfeits any advantages it would have given him.

If the player who grabbed the Demolition die is the one who made the mistake, he must pass it to the one who spotted his mistake.

Finally, the player with the Demolition die takes a victory token, unless otherwise indicated by the limits in the Structure Guide.

Note: These are the general rules for attacks. Each structure gives its builder a specific advantage that may supersede these rules. Please reference the Structure Guide for details.

There are three methods for attacking, as shown on the Demolition die:

Using the appropriate action, try to knock that players crown off. You may make only one attempt (unless otherwise stated in the Structure Guide), and the defender cannot obstruct in any way.

If you successfully knock the crown off (part of the crown block must touch the playing surface), you earn a victory token. If you miss, the defender earns a token.

Pass the Demolition die to the defender, who becomes the new attacker. He must attack the structure of the player on his other side (not the player who attacked him, except in a 2-player game).

Attacks continue around in the same manner until the first attacker defends his structure.

If your structure is accidentally knocked over at any point during a round, it may be rebuilt.

If it happens during the Building phase, the new structure must follow the building rules. You may choose to build the same structure you originally built, or you may build a different one.

If the knockover occurs during the Destruction phase, you must rebuild the same structure, but do not have to follow the building rules.


Starting a new Round

Once every player has had a chance to attack and defend, start a new round with another Building phase.

Place the Demolition die back in the center of the playing area. You may build the same or different structure, depending on your strategy.

The first player to collect 8 victory tokens wins the game, and play ends immediately, even if a phase is not complete. 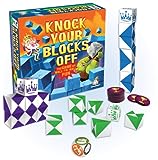