The fastest word-builders win this quick-thinking, head-to-head word game. Two players or teams draw cards and set them down next to each other, face up.

Each card features word parts including suffixes, prefixes, single vowels, consonants and diphthongs. Be the first to build a word by adding one or more letters to the letters on the cards and you win the round.

Both players flip the top card on their stack; then race to make a word using the letter on both cards plus at least one additional letter.

Shout out a legitimate word first and you win the cards. The player with the most cards when the stacks are gone wins the game! Win more cards than your opponent by building words using letter combinations on the KaBAM! cards. 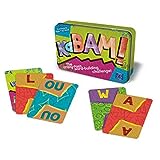