In Kaboom, you take on the role of Master Builder, constructing towers as your opponents, the Saboteurs, simultaneously fire their catapults in an attempt to knock them down. Towers only score points if they are still standing at the end of your turn.

Score the most points by quickly constructing towers, and deny your opponents points by shooting down their towers with your catapult and dice.

The player with the most points at the end wins the game!

Place the Mega Tower Tile in the center of the table.

Shuffle the Small Tower Tiles, and arrange them randomly around the Mega Tower Tile, as in the illustration below:

Note: You can place the tiles wherever you want to, just as long as they are touching and located centrally around the Mega Tower Tile.

The youngest player starts the game as the Master Builder. (On subsequent turns, this responsibility will rotate clockwise). The Master Builder takes the Tower Blocks and Sand Timer and places them in front of him.

All other players will take on the role of the Saboteurs (this turn). Each Saboteur receives one Catapult, and a number of Ammunition Dice based on the total number of players:

Any remaining Catapults and Ammunition Dice are not used, and are placed back in the box.

When all players are ready, the Master Builder flips over the Sand Timer and begins his construction, while the other players simultaneously launch their Ammunition Dice to try and knock over the Builder's Tower Blocks.

If one or more towers are still standing when the Sand Timer runs out, the Master Builder claims his successful Small Tower Tiles and places them in front of him. The role of Master Builder then passes to the next player.

The Master Builder begins the turn by flipping over the Sand Timer.

All players will then have exactly 30 seconds before the timer runs out. The Master Builder must quickly choose a tower on a Tower Tile he wishes to construct, then begins stacking Tower Blocks on that tile in the order indicated.

The Master Builder can choose to complete as many towers as he wishes (keeping in mind that he has a limited number of Tower Blocks), as long as the Sand Timer has not run out of time.

As the Master Builder constructs his tower(s), the other players take on the role of Saboteurs.

Saboteurs are allowed to fire their Ammunition Dice at the towers of the Master Builder, as long as there is still time remaining in the sand timer.

To do so, the Ammunition Die is placed on top of a catapult and launched in the direction of a tower.

If an Ammunition Die lands on top of a Tower Tile, that tile can no lon- ger be built on for the rest of the turn. The Master Builder can neither start a new tower on it, nor continue to construct an existing tower in that location.

However, if the tower has already been completed, it will still score points at the end of the turn as long as it is still standing.

As soon as the Sand Timer runs out, all players must immediately stop what they are doing and verify the Master Builder's work.

If one or more towers are still standing, all players verify that they have been built correctly (stacked in the correct order, on top of the correct tile), then for each tower built correctly, the Master Builder takes (and scores) the corresponding Tower Tile and places it faceup in front of him.

The number written on each Tower Tile indicates the number of points that tile is worth at the end of the game.

After the Master Builder has scored his points, the turn is over. The next player (clockwise) takes the Sand Timer and all 16 Tower Blocks and gets ready to begin his turn as the new Master Builder.

All other players become Saboteurs and take the number of Ammunition Dice based on the number of players. Play continues in this manner until each player has taken their turn as the Master Builder. This concludes one round.

After a certain number of rounds, agreed upon by the group (we recommend 3), the game is over and the players add up the points indicated on the Small Tower Tiles they scored during the game.

The player with the highest total points wins the game.

The Mega Tower Tile awards no points, but in the rare case that the Master Builder manages to construct this tower, and it is still standing at the end of his turn, he immediately wins the entire game. 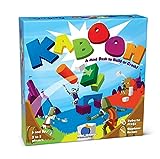