With elements of games like Celebrity, Time's Up! and Taboo, Identity Crisis is a team-based game where you compete to guess famous identities based on the clues given by your team mates.

In the first round, you give verbal clues, in the second round you give one-word clues (to the same celebrities used in round one). You also have "Crisis" cards, which indicate that players from either team can guess on this turn.

The game includes a timer to limit the clue givers to one minute.

Players compete to identify the famous and the infamous, the real and the fictional, during two rounds of play.

In the Identity round, use as many words as you like to describe the identity. In the Crisis round, use only one word! Can you describe someone in one word? It's a challenge...but that's all part of the Crisis!

Engage in a little 'identity theft' and steal points from the other team.

The board game was the later inspiration for the syndicated game show Celebrity Name Game hosted by Craig Ferguson. 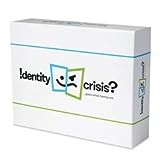