All play at once. Each player chooses a game board and decides which side to use. Now each player draws a card from the stack. On each card, there are 8 images, 1 from each of the game boards.

Whatever game board you have, there will be only one object on the card you draw that will have an exact match on your game board.

If you are the first player to find an object on the card you draw that has an exact match on your board Ding! the bell to win the round of play.

Each player chooses a game board. Place the stack of cards and the bell on the table within reach of all players. Agree to play to a certain number, say, 6. If you choose to play to 6, then the first player to get 6 cards wins the game.


Both players draw at once. Draw one card from the stack and look at your game board to find an object that is identical to one on your card.

Try to be the first to see a match, shout out the name of the object and Ding! the bell. This ends the round of play.

When one player rings the bell the round is over. If you are first to ring the bell and correctly find the matching object, keep the card, placing it in your pile. If you were not first, place your card on the bottom of the stack.

Each player draws a new card to begin the next round. Play continues until one player has 6 cards (or the agreed upon number of cards).

If you are the first to earn the agreed upon number of cards, you win!


All Players Draw At Once.

You will need pencil and paper to keep score. Decide on a winning score, say, 50. Take a card from the stack and look at your game board to find the object that is an exact match to one on your card.

If you are the first to see a match, Ding! the bell and shout "First!"

The next player to find the match Dings! the bell and shouts, "Second", and so on. The game continues until every player has identified the object on the card that matches one on his or her game board.

Count the number of players. If there are 4 players, the winner of the round scores 4 points, the second player to finish scores 3 points, the third player 2 points, and the final player 1 point. Record each score on a piece of paper.

Draw a new card and continue play until one player reaches the agreed upon number of points.

If you are first to reach 50, or the agreed upon number of points, you win!


All players play at once. During the game, players pass the game boards around the table, looking for one object that has been agreed upon at the beginning of the round. You will need a pencil and paper to keep score.

Take one card from the stack and place it in the middle of the table. All players together select one of the objects on that card to match. Example:

In the illustration on this page, all players are looking for the fish that is circled.

After selecting the object, each player takes one game board. If there are three players, the extra game board is placed on the table.

During this game you can look at both sides of the board you are holding, and you will pass game boards from one player to the next, but you can only hold one game board at a time.

The player that finds the object claims the card and wins the round of play. Decide how many rounds you will play: 3 rounds is recommended.

If you can't find the object on your board, give the bell one Ding! At this signal, all players must immediately pass their game board to the player on the left. Each player can Ding! the bell only once during each round.

If there are 3 players, any player at any time may trade a game board in hand for the game board that is on the table (not being used by another player) without ringing the bell.

If you find the match, Ding! the bell three times to stop play, claim the card and win the round. Draw a new card and begin a new round of play.

If you have the highest score after the agreed upon number of rounds, you win! 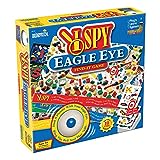