At dawn on the 24th of February, 1895, the sound of thunder woke up London. A big column of smoke foreshadowed the catastrophe: a bomb had exploded in the Houses of Parliament. The security forces reacted immediately and arrested Michael Chapman, a young worker linked to anarchist groups, near the place of the attack.

Mycroft Holmes is in charge of investigating the explosion for the Crown prosecution. Mycroft needs to determine if the attack is the action of a lone wolf or part of a bigger plot.

It appears to be another easy case from his comfortable easy chair at the Diogenes Club, when he discovers that the detective hired by Michael's parents to prove the young man's innocence is no less than his brother Sherlock Holmes. Michael's family are Surrey farmers and believe that Michael is innocent.

The duel between the two most brilliant minds in London begins. The Holmes have to prove if Michael is innocent or guilty. Is Chapman an unfortunate young man that fell in the wrong company or a member of an anarchist cell?

1 The game board is placed on one side between the players.

2 On top of the game board, we place the character cards Doctor Watson, Mrs. Hudson and Inspector Lestrade in their respective spaces.

3 The remaining character cards must be shuffled and the character deck placed on their space of the game board.

4 Draw 2 character cards and place them in the two spaces of «Day 1» (you can also try the *Alternative Start). The game always starts with 5 available characters.

5 The investigation markers are placed in the centre of the table as a reserve for both players.

6 Decide who is going to play first; the first player chooses if he/she is going to be Sherlock or Mycroft. Each player takes his/her 3 action markers and 5 investigation markers from the reserve.

7 The clue deck must be shuffled and placed on the side between the 2 players.

8 Next, 4 clues must be drawn from this deck and placed in a visible line. The game is ready to start.

You will have to obtain the necessary clues to accuse or to exculpate Michael Chapman. To this end and using the action markers, you will visit and activate the skills of the different characters found around London.

The game lasts 7 whole turns that mimic one week of investigation. Each turn consists of the following phases:

Skills of the Characters

The characters allow the players to obtain investigation markers and to use them to obtain clues from the visible line in the centre of the table (or, in some cases, directly from the clue deck).

Limited to 24. If the skills of a character allow you to take more, you can only pick those remaining.

Some characters require you to discard clues, either from the visible line or from your play area. The discarded clues are always placed face-down on a different pile.

Some characters allow you to obtain clues directly from the deck. After secretly checking these clues, they will remain hidden on your side of the board (you will overlay them so that your opponent can know how many you have).

The hidden clues will only be revealed and placed with their type at the end of the game. During the game these cards are completely immune to all effects of the characters, i.e., they cannot be stolen nor exchanged.

The wildcard is the only clue that can never remain hidden. If you draw a wildcard from the deck you will have to display it as explained next.

When you draw one wildcard you can immediately assign it to a type of clue that you already have to increase its amount or you can also put it aside to start a new type of clue in a later turn.

Bear in mind that you cannot assign more than 1 wildcard to the same type of clue.

Example: Mycroft has 2 Cigarettes and 1 Bullet when he gets 1 Wildcard. He can associate it with any of his clues, but decides to put it aside. In a later turn he gets 1 Button and places it on top of the wildcard; now it is as if he had 2 Buttons.

A map of the Parliament has been found broken in 5 pieces. The more fragments you have at the end of the game, the more points you will get.

Army doctor and tireless adventure companion of Sherlock Holmes. Watson is the narrator of all of Sherlock's investigations and his principal adviser in medical matters and forensics.

Advice: use 1 investigation marker to obtain 1 clue from the visible line.

Holmes' and Watson's landlady in 221 Baker Street. A long-suffering lady that worries about her peculiar tenants, despite the chaos they bring to the house.

Rest: you get 3 investigation markers from the reserve.

Scotland Yard Agent, stern and grumpy, very successful in his job. Though he has Sherlock in high regard, as a representative of the law he is not comfortable with Holmes' unconventional methods.

Raid: use 3 investigation markers to obtain 2 clues from the visible line.

Singer, actress, manipulator, thief... this is how Sherlock Holmes respectfully refers to "The Woman", the only one in the world that has managed to deceive the great detective.

Theft: use the number of the day of the week to pay as many investigation markers and get 1 visible clue from the play area of your opponent to add to your pile of hidden clues. You cannot take any wildcard nor any hidden card.

Scotland Yard Agent, brave and intelligent and well respected by Sherlock Holmes. Gregson is somehow the opposite of Lestrade since he understands that sometimes you must dodge the law to reach your objective.

Break-in: you can obtain from 1 to 3 clues from the visible line using 2 investigation markers for each.

One of the many children abandoned in the streets of London.

He is the leader of the "Irregulars of Baker Street", a band of street-wise orphans that often provide useful information to Sherlock.

Underworld network: you get 5 investigation markers from the reserve.

Journalist of the gossipy London tabloids. Although Holmes and Watson consider him the worst that Journalism has to offer, his ability to be the first to decipher secrets and hear rumours has often helped them.

Rumours: you can take from 1 to 3 clues directly from the deck, using 1 investigation marker for each. Next, keep a card hidden in your play area and discard the rest.

Dirty and clumsy, Toby is nonetheless a great tracking dog. He has helped Sherlock Holmes in a couple of cases.

Tracking: you get as many investigation markers from the reserve as type of clues you have that very moment. Map Fragments are a type; a non-assigned wildcard does not qualify.


Example: Holmes has 3 Explosives, 1 Map Fragment, 2 Cigarettes and 1 non-assigned Wildcard. When he goes to Toby for his tracking skills you get 3 investigation markers.

An ex-convict, currently a sort of bodyguard and occasional confidant of Sherlock Holmes. They keep the relationship secret so as not to compromise Sherlock's investigations.

Intimidation: discard 1 to 3 cards from the visible line.

Young, cheerful, ingenious and circumspect, as his Job requires. He assisted Sherlock Holmes in several cases after Dr. Watson married and moved from Baker Street.

Errand: you can discard one clue from your play area (though not a wildcard or map fragment) and take as many investigation markers as the value of the card minus the day of the investigation you are in.

With this false name, the King of Bohemia sought help from Sherlock Holmes to solve a blackmail case. The King can provide Holmes with information on affairs of the nobility.

State Secrets: the active player can take 1 clue from the visible area. Then, his/her rival can use 1 investigation marker to obtain 1 clue directly from the deck, keeping it hidden in his/her play area.

Honest and clever lady that required Sherlock's assistance to solve a puzzling case related to her Job as a housekeeper in a mansion. She is currently the headmistress of an elite girls' school.

To increase the tactical difficulty of the game you can use the special, double-sided Sherlock & Mycroft card.

After deciding who will be the first player, place this card on the side of the second player. This second player will be able to reserve a clue if he/she wishes at any moment of his/her turn, even after replacing the clues of the line if he/she has obtained any.

To reserve a clue means to take one from the visible area and place it horizontally in your play area apart from the other clues. A reserved clue is immune to any skill and does not count as a clue nor as a type since the players do not have them yet.

When in a later action the player can obtain clues thanks to the skill of one of the characters, he/she will be able to get the reserved clue instead of one from the line.

When a player reserves a clue, turn the card Sherlock & Mycroft so that the player that can now reserve is visible. No player can reserve more than one clue at a time. If you want to reserve again, you will need to obtain your reserved clue first and have the Sherlock & Mycroft card on your side.

If the game ends and a player has not obtained his/her reserved clue, that player will lose 3 points.

You can include these villains to increase the difficulty of the game. You can choose which villain to include, you can include one at random, you can even include both of them!

When you prepare the game and after drawing the first 2 characters of Day 1, put the villain card or cards in the character deck and shuffle. If one of the cards corresponds to a villain when a new character is drawn, the game is temporarily put on hold until the effect of this character is solved. Next, this card is discarded and we must draw a new character.

Impossible! Moriarty died falling in the waterfall... or did he? Maybe the «Napoleon of Crime» is back with hidden intentions.

Both players, starting with the initial player, discard a visible clue from their play area or return 2 investigation markers to the reserve. This process must be repeated one more time but in reverse order.

If a player does not have clues and not enough investigation markers, this player will have to give all those that he/she holds.

Moriarty's deputy, ex-army turned killer. He has been spotted in the city and has caused a new explosion to distract the Holmes brothers

Starting with the starting player, each player must lay down one of their standing action markers. During this turn, they will only have 2 actions and naturally, will not be able to use the character under the laying down a marker.

The game ends when the second player has used his/her third action marker on Day 7.

Note: one character will never be used since there are 12 Characters in the game.

Now the players must reveal the hidden clues that they have obtained and assign them to their corresponding type. The wildcards not assigned to any type of clue can be assigned now. Afterwards, the score starts:


The player with more points wins. 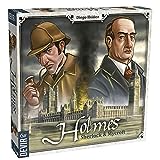