Each player takes a paper from the pad. Together, everyone chooses whether to play with the front or back of the paper.

Any player rolls all 8 dice, then sorts them into groups of matching number. (If you are playing on the back side, only roll 7 dice. O)

Then, each player does the following steps simultaneously.

First, choose a number that was rolled. Write it down in hexes equal in number to the amount of dice showing that number. (You choose a number yourself and may choose the same number as another player).

The first number you write down on your turn must touch any other hex with the same number (written or printed).

Any subsequent number you write down on your turn must touch the hex that you just wrote down a number in.

For example, if the roll has four 3s, you must write down all four, starting next to a 3 that is already on the paper.

Second, choose a different number that was rolled, and write it down in the same way as the first one.

Finally, write the two numbers you chose down in the leftmost empty boxes near the bottom-left corner of your paper. Start the next round!

Once per round, you may use one of your three bonuses. If you use a bonus, cross it off your paper (near the top-left corner). You can only use each bonus once per game.

The game ends once all the boxes in the bottom-left corner are filled (after seven rounds on the front side, or after six round on the back side).

Each player scores points as follows.

Bonuses: Score 2 points for each of your unused bonuses.

Outer Areas: Score points for each outer area you filled (counting both written and printed numbers). For each filled area, score points equal to the most common number in that area. On a tie, use the higher tied number.

Middle Area: Score the middle area if you filled it, in the same way as an outer area, but double its points.

Connections: For each pair of equal pre-printed numbers that you connected with an unbroken line of the same number (but of any length), score points equal to the number.

Straights: Score the two rows in the bottom-left corner. In each row, score points equal to the highest number you can count in that row starting from "3"without missing a number ("3", "4", "5", 6", etc)..

(The order of numbers does not matter. If you have no "3" in a row, you score no points for that row).

Add up your scores to get your total. The player with the most points wins! 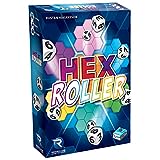