Two apprentice gardeners compete for the coveted job of imperial gardener. They will have to show how skillful they are, and will try to take advantage of this first wind of spring to flower the water lilies in their color, and use them to create the most harmonious combinations.

Place the game board in the middle of the table and a pier on each side.

Each player chooses a color, takes all the corresponding flowers, shuffles them value-side down, and draws 3 of them, which he places in front of him, value-side down.

For the first round, place the water lilies so as to form the following pattern:

Arrange the scoring track next to the game board. Put the 2 characters on the track, in front of a stone path.

Flower water lilies and move them thanks to the breeze of the first wind of spring, so as to create harmonious geometric shapes (lines or groups of flowers of the same color), and score victory points

The current round ends as soon as a shape is created. The corresponding gardener scores 1, 2, 3, or 5 points according to the shape achieved. The first player to reach a total of 5 points becomes Imperial Gardener!

Both gardeners select a flower simultaneously: They read the value of the 3 flower buds placed in front of them.

Each flower has a single value, from 1 to 8. After they have seen the different values, each gardener chooses one flower. When both gardeners have selected a flower, they reveal their values simultaneously.

The water lilies flower and are moved by the Haru Ichiban: "Flowering" a water lily means placing a flower on an empty water lily.

A: The junior gardener flowers automatically the darkest water lily in the pond.

B: The senior gardener flowers a water lily of his choice.

If he puts a flower on a water lily occupied by a frog (whatever its colour), he moves the frog to an empty (with neither a flower nor a frog) water lily of his choice.

C: The junior gardener calls the first wind of spring.

He can move a water lily or a group of water lilies on the water, vertically or horizontally, by one case. However, any movement that would push a water lily out of the pond is not allowed.

He chooses a water lily and turns it over so that its dark side is visible. He can turn on its dark side a water lily which contains frog. In this case, the senior gardener moves the frog (whatever its colour) on the empty water lily (with neither flower nor frog) of his choice.

Each gardener draws a new flower from his stock, so that he has 3 flowers in front of him again. Next, they both choose a new flower to determine who will be the senior and junior gardener for this new turn.

When both gardeners select flowers with the same value, the flowering happens automatically.

When they have just turned the flowers over, if the gardeners realize that both flowers have an equal value, the first player to mimic the sound of a frog can play his frog first.

Indeed, when the frogs are removed to be replaced by flowers, the gardeners place them on another water lily of their choice. The gardener who croaked first places the frog in his color on a water lily of his choice, and so does the other gardener. (schema)

Important: When only 2 non-flowered water lilies are left on the pond, the frogs are taken out of the game until the end of the round.

A round ends when:


In both cases, a new round begins:

The game ends when one of the gardeners reaches or exceeds 5 points. He is appointed Imperial Gardener and wins the game. 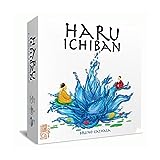