HAIL HYDRA is best learned by following the read-along found on the First Game Rules located in this box. If you've never played HAIL HYDRA before, it is recommended to use that guide first.

If you have already played HAIL HYDRA using the First Game Rules and are looking for the new changes to the game, read all sections that have the symbol below in the top left corner.

You will be defeating Villains as a team of Heroes. If a Villain survives a round, it will inflict damage on New York City. It's up to your team to defeat them quickly and strategically! But beware, there may be HYDRA agents sabotaging your efforts...

S.H.I.E.L.D. members (the good guys)- Defeat all the Villains before New York City is Destroyed

HYDRA agents (the bad guys)- Sabotage the S.H.I.E.L.D. member's efforts to defeat Villains, allowing the Villains to Destroy the City.

Shuffle the 80 Attack Cards and place them face down in a pile in the center of the New York City Card on the space that says "Draw Pile. "


Each game will feature Five Villains:

Villain, and the Final Villain

Red Skull. Except for Red Skull, randomly and secretly draw the four other Villains from their respective danger levels found on the back of the card and place them face down in a pile.

Villain on top, followed by the

Villains, and then the

Red Skull on the bottom.

Place the Avengers Tower Mover onto the New York City Card at 27 health. Count the number of people playing, then reference the chart below.

Reference the chart above. After showing the group both types of Loyalty Discs, place that amount of HYDRA and S.H.I.E.L.D. Loyalty Discs face down in a pile and mix them all up. Pass one face down to each player. Each player secretly looks at their disc. Don't show your Loyalty Disc to anyone!

The amount of HYDRA agents in the game is public knowledge. Players who are HYDRA will know who each other are, but S.H.I.E.L.D. members will not. To ensure this happens, someone should volunteer to say the following aloud after memorizing it:

Everyone close your eyes.

HYDRA agents, open your eyes and look at each other.

Everyone open your eyes.

Loyalty Discs are passed out; HYDRA agents identify each other. A Villain is revealed, starting a Mission. A round in the Mission, known as an Offensive, begins. Each Offensive has 5 steps:

A Mission ends when the Villain is Defeated. Team begins Knock Out Phase, votes to Knock Out Heroes. Another Mission begins by flipping over the next Villain.

Everyone playing is considered a Hero, regardless if you are S.H.I.E.L.D. or HYDRA. Everyone publicly chooses a Hero to play as. Place the Hero face up in front of you. You will be this Hero for the whole game.

Each Hero has a special ability which can be used only one time per game. These abilities are powerful and will impact the game in meaningful ways when used correctly. The ability can only be played during certain parts of the game, specified on the card and at the end of these rules.

On the back of each Hero Card are suggested strategies for when to use your ability if you are S.H.I.E.L.D. or HYDRA. Also located on the back are instructions for announcing HAIL HYDRA!, explained later in the rules.

You may not use your ability while you are Knocked Out or if you have announced HAIL HYDRA!

Your team of Heroes will be fighting a devastating lineup of Villains in a number of Offensives. Villains are broken up into 4 levels of difficulty signified by the HYDRA skulls on the back of their cards. Each Villain has a starting amount of Health, found in the top left corner of the card. When you reveal a Villain Card, place that many Health Discs next to the card. These discs track the Villain's remaining Health.

A Villain left alive at the end of an Offensive deals Damage to the City. Their strength is indicated in the bottom left of their card. Next to this number is the Villain's unique power. The Villain performs this additional effect every Offensive as well if left alive. This should be read aloud to the group prior to beginning the attack on the Villain.

Some Villains have additional buffs. If they do, a symbol with the buff will be next to their attack.

Defense - Makes the Villain more resistant to attacks. Place the specified amount of Defense Discs next to the Villain's Health Discs. If a Villain with Defense is dealt Damage, reduce the damage the team's attack deals by the Villain's current Defense value.

Quick Attack - The Villain's power impacts this Offensive in some way. Be sure to read the power before beginning the fight against this Villain.


Attack Cards and Damaging the Villains

The text on each Attack Card has no impact on damaging any Villain.

During the game, Attack Cards will be played face down by every player, shuffled, and revealed all together. The values on these cards will be added together to create the team's attack on the Villain. Your team will do the following based on what the total value of the team's attack was:

Each round is known as an Offensive, explained in detail below. This is the synopsis, for reference during the game:

The game is played in Offensives and Missions. Offensives are the team's combined attacks on a Villain. A Mission starts when a new Villain is flipped, and concludes when that Villain is Defeated. There may be multiple Offensives in a Mission.

Excluding Step 1 in the first Offensive, each Offensive consists of the following:

If the Draw Pile runs out, shuffle all the Attack Cards in the Discard Pile to create the new Draw Pile.

You are encouraged to communicate at all points during the game. This helps deduce who is secretly sabotaging the group. However, you may lie at any point! If you are HYDRA, you'll likely be lying quite a bit to convince the team that you're actually working with them instead of sabotaging the group.

When laying down Attack Cards, you are only allowed to say "This is good" or "This is bad". You may not add descriptive words into that phrase such as "very" or "kind of".

Even after Attack Cards are revealed, you are NEVER allowed to communicate anything that hints at any specific Attack Card. This rule is in effect for the entirety of the game.

No Specifics! You Cannot Say:

I put in a blue 3 and 4! I contributed the best blue card in the game! Did you put in that red -5? This is very good!

These are ok to say:

This is bad. I put in a good card. One of those bad cards is mine. Don't blame me, I contributed a good card!

You must be open about how many Attack Cards you are contributing. It helps the team deduce who is secretly a HYDRA agent.

You may be forced to play cards you do not want to play. This is part of the game. You still are not allowed to be specific about what you played.

Use Knocking Out effectively to discover who is HYDRA before you get to Red Skull, or S.H.I.E.L.D. will have an extremely difficult time winning.

If you are Knocked Out of a Mission, you rejoin the team after the upcoming Mission is over. A Mission ends when the Villain is Defeated.

To begin the Knock Out Phase, set a timer for 2 minutes. When the 2 minutes are up, the group immediately votes to Knock Out a Hero. On the count of 3, every player simultaneously points to another Hero.

Refer to the chart above. If there are more voting rounds in this Knock Out phase, immediately start the next round by setting the timer for 2 more minutes of discussion. If all voting rounds have been exhausted, the next Mission begins and the Villain is flipped over regardless of how many Heroes are Knocked Out.


If you are knocked out of a mission:

You rejoin the team after the upcoming Mission is over. You may not play any Attack Cards on the Villain. However, you still draw and discard Attack Cards, and receive the First Player Token as normal.

Although you are Knocked Out, you still get to vote, and still have an opportunity to influence the Mission.

After everyone draws Attack Cards, but before any are played, you must hand 1 -2 Attack Cards face down to another Hero on the Mission.

You may not give them randomly.

If you are HYDRA, you may reveal yourself by flipping over your Loyalty Disc and yelling "HAIL HYDRA!" You may do this any time during a Mission, even if you are Knocked Out of the Mission.

Rules for hailing HYDRA are located on the back of your Hero card, under the suggested strategies for your Hero Ability. Due to this, other players won't know if you're looking at the strategies or the HAIL HYDRA! rules. As soon as you HAIL HYDRA!, your rules change.

Once you HAIL HYDRA!, you may no longer use your Hero's special ability.


For the rest of the game:

In your final battle to save New York City from Destruction, you'll have to defeat Red Skull, the hardest Villain in the game! Beware: Red Skull holds the Cosmic Cube! Due to the Cube's volatile nature, dealing too much Damage to Red Skull will damage the City too! This is called the Cosmic Cube Penalty.

If your team exceeds Red Skull's remaining health by 5, any additional Attacks directly Damage the City.

Multiple Special Abilities can be used simultaneously. Whoever calls it first gets priority. "Normal Play" is anything not related to a Special Ability. Knocked Out Heroes and revealed HYDRA agents may not use their Special Ability.

If New York City is Destroyed at any point, HYDRA wins! 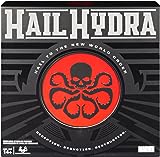