Collect complete color sets of professions (all 5 colors of Trader, for instance), which you use to buy victory points (VP). The first player to gain 20 VP on his or her turn wins.

Each turn you get 2 actions. For each action, you can do one of the following:

Play one profession card into your action area face up, and use its ability.

If you do not have two cards you want to place into your guildhall, you may use the "0" ability and place only one card from your hand, or place no cards at all.

However, you cannot place two cards into your guildhall and then choose not to put a card into your hand. You must do all of an ability at a given level or none of it.

Discard any number of cards from your hand, placing them on the discard pile in any order. Then draw cards from the top of the deck until you have six cards in your hand. Although this always results in a hand of six cards, there is no hand limit if you gain cards some other way.

If you need to draw a card from the deck and it is empty, shuffle the discard pile and place it face down to form a new deck. Draw the remaining cards from the new deck.

Two profession cards of the same color can never be in a single guildhall at the same time. You cannot play or place cards that duplicate a card already in your guildhall, and cannot place a duplicate card in another player's guildhall.

If an ability lets you move an entire chapter to your guildhall, but one card in that chapter duplicates a card you already have in your guildhall, you cannot move the chapter.

You can place a given profession and color in your guildhall if that same card is already in your action area.

If for some reason you find a duplicate card in a guildhall, discard duplicates until only one of the card remains.

Discard completed chapters (see below) in any order from your guildhall to buy one VP card from the center row.

Place the VP card into your action area face up. Some VP cards have abilities that take place immediately when they are bought. As with abilities on profession cards, you may choose not to use them.

When you buy a VP card, immediately place the top card of the VP card deck into the center row. There are always 5 VP cards available to buy in the center row.

When all five colors of a single profession are in your guildhall, you have completed the chapter. Immediately turn them all face down in a stack. They now exist only as a completed chapter. They no longer affect or are affected by other cards. You may use completed chapters only to buy VP cards.

However, if you play a blue Historian and take a purple Trader from the discard pile and place it into your guildhall, you immediately complete the Trader chapter, and turn them face down.

With no Traders in your guildhall, you may play the red Trader on your next action (even if it's on the same turn) to start a new Trader chapter.

Arrange your cards into chapters by profession.

Score your points. All players must be able to see your total VP. If you have fewer than 20 VP, play passes clockwise. If you have 20 VP or more, the game ends.

If you have 20 VP or more at the end of your turn, you win the game! You can only win on your turn. 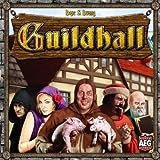 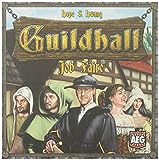