Be the team to score the most points by guessing acted-out words.

Divide the players into 2 teams. It doesn't matter if one team has one more player than the other. In turn, each player on a team acts out 4 words while his/her teammates try to guess them.

It's a card holder. It holds your 4 Guesstures cards, while you act out the words on them.

It's a timer, too, so act fast! When the word on each card is correctly guessed, grab the card before it gets swallowed by the Mimer-Timer.

The cards drop into the timer one by one. You only get a few seconds to act out each word before its card gets swallowed. Your team gets points only for the cards they guess and you grab!

It's also a scorekeeper. Fill in team names on the Mimer-Timer with the SCENE label. Use provided.

Decide which team will take the first turn. The first team chooses an Actor to go first.

After the Actor from the first team is finished Guessturing, an Actor from the second team takes a turn. Teams alternate turns. Each team member gets to be an Actor during each Scene.

On your turn as an Actor, do the following:

Set the Mimer-Timer on a flat surface in front of you, such as on a table. The guessing players must never be able to see the words on the cards while they are in the Mimer-Timer.

Open the Mimer-Timer's arm. Push the switch up on the unit. Wind the knob clockwise as far as it will go (see Figure 1 for location of switch and knob). Make sure the Mimer-Timer is fully wound.


2. Draw and place your Cords

Draw the first 4 blue cards from the card box. Look at your cards and decide which words you want to act out.

Now insert your 4 cards with the words you wish to perform up and facing you.

Important: Use the Easy-Hard indicator when placing your cards in the Mimer-Timer. The card closest to "Easy" will be swallowed up first! It's a good idea to place the cards you think you can get your team- mates to guess faster closer to the "Easy" side.

Close the Mimer-Timer's arm, being careful to avoid pushing down on the cards. Now the seconds will start ticking away!

Act out the words, starting from Easy to Hard. Do NOT skip over any words. Rules for Guessturing are found in the HOW TO GUESSTURE box in the center column. Remember, the opposing team doesn't guess. They only guess when their Actors are Guessturing.

As soon as someone on your team shouts the correct word, quickly grab its card from the Mimer-Timer. Then go on to Guessture the next card.

If the Mimer-Timer swallows your card before your teammates guess the word (or before you can grab it), hurry on to the next word!

Keep an eye on your cards so you won't be Guessturing a word after it's been swallowed!

Note: In most cases, guessing forms of each word are acceptable. For example, guessing 'ERUPTION1 for "ERUPT" is O.K. but guessing "TRAP" for "MOUSETRAP" is not O.K.

Then use the crayon to enter your total score under your team's name next to "Scene 1" on the Mimer-Timer.

Retrieve any cards swallowed by the Mimer-Timer. Just pick up the game unit-they'll be underneath! Then return all 4 cards to the back of that color card section in the card box.

Now it's time for an Actor from the other team to Guessture! The new Actor follows Steps 1 through 5.

Alternate turns until all players have had a chance to act in Scene 1. If one team has one less player than the other team, that team chooses an Actor to Guessture for 2 turns.

Play Scene 2 the same way you played Scene 1, using the orange card deck (2-point and 4- point words). Also, enter each team's score next to "Scene 2" on the Mimer-Timer.

After both teams have completed Scene 2, total the points for both Scenes on the Mimer-Timer. The team with the most points wins the game!

When you're through playing, clean the scoring surface by rubbing gently with a soft cloth.


For A Fun Alternative

Try a new way to play Guesstures! Instead of dividing into teams, take turns being Actors while the rest of the players all shout out their guesses. 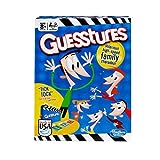 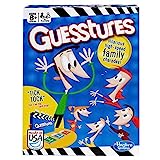