Win the game by being the first player to collect 3 Recipe Discs: 1 Mild, 1 Medium, and 1 Spicy.

To collect a Recipe Disc, be the first player to have 5 Ingredient Cards that match the Recipe Disc.

The recipe must be duplicated with the EXACT number of Avocados, Tomatoes, and Chilies. Too few or too many, and you do not win the Recipe Disc.

Place the Recipe Discs in 3 piles (Mild, Medium, and Spicy) face down in the center of the table. Make sure they are visible to all players.

Shuffle the Ingredient Cards and deal 5 cards to each player. Place the Ingredient deck within easy reach of all players, and turn over the top card. This is the discard pile.

If a player is dealt one of the Special Cards (Lime, Cilantro, or Onion) shuffle it back in, and draw a replacement card. Players place their 5 Ingredient Cards face up in front of them. Then the top Recipe Disc of each type is turned over and play begins.

Choose a player to go first, perhaps the player who most recently ate guacamole.

This player has two choices. If the card that has created the discard pile is useful, the player can take it to replace one of their face-up Ingredient Cards, which is then discarded.

Play continues with the player to the left.

When a special card is drawn

Special Cards (Lime, Cilantro, and Onion) are not added to a player's hand. Instead, they are immediately discarded with the following effects:

When a player has the right combination of Avocados, Tomatoes, and Chilies they shout, "Guacamole!" and claim the matching Recipe Disc.

Play continues until one player has collected all 3 types of Recipes (Mild, Medium, and Spicy).

Note: Players may collect extra Recipe Discs (2 Milds for example). It will not help them win but may thwart their opponents.

For an Easier Game

For younger players, it may be easier to have only 1 Recipe Disc available at a time. The first player to collect 3 Recipe Discs (of any type) is the winner. 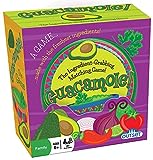 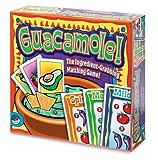