Mix all cards thoroughly. Give a pile of 12 cards to each player, which they keep face down to their right. The remaining cards form the draw pile in the center of the playing area.


The phases in detail:

Simultaneously, all players take the card pile to their right and select one card from that pile, adding it to their hand. Then, they pile the remaining cards face down to their left, between themselves and their left neighbor.

Each player decides which one of his hand cards he wants to play. The players place this card face down in front of them. After all players have played a card, the cards are turned over simultaneously.

The players compare the numbers of their played cards. The player with the lowest number begins and checks which of the following preconditions apply:

Example: Lincoln plays the action card (43). The needs of this card are: 1x

. His display includes cards with these icons, thus he has met the needs.

In case the player has paid the costs, met the needs or played it directly, he may perform the card's instructions.

Please note: The card he just played and its icons are considered part of his display.

Next, the player who played the second lowest numbered card performs his turn, etc.

Subsequently, each player must use all "Each turn" abilities of cards in their display, in any order. Each such ability may only be used once each turn. Other abilities may trigger off of anything that happens during a game, and happen once per time the condition they look for happens.

Action cards are discarded after they resolve. When an Action card does something next turn, leave it out until the end of that turn, and discard it then.

Thugs allow the players to gain money, perform additional actions or take development markers. Thug cards are added to the player's display. Their icons can be used during the remaining game rounds.

in her display and thus takes $20,000 from the money piles in the center.

The players may take shares of "legal" business establishments. When doing so they place development markers on these cards. Each marker is worth $10,000 at the end of the game.

Each time a holding card is played, development markers are placed on it immediately: One marker for each icon (

), printed on the card; furthermore one marker for each of these icons on other cards of that player's display, each time they appear.

Example:: Lincoln plays the holding card (8) and puts 4 development markers on it:

The game ends after 12 game rounds.

Note: Because no cards are played during the first two game rounds, each player usually plays only ten cards during the course of the game and still keeps two cards in his hand at the end of the game.

Each development marker is worth $10,000 at the end of the game.

Each player adds his cash to his development markers' worth and the player with the most money is the winner.

In case of a tie players share the victory. 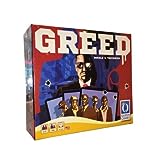