The object of the game is to be the first to collect a complete set of commodity cards e.g. 9 Oil, 9 Shipping, 9 Gold, etc.

The player who collects a full set of cards scores the value of those cards i.e. a full set of GOLD is worth $150 Million. The first player to score $500 Milion wins the game.

The game can be shortened by stopping at an agreed time or dollar value.

The wild cards Get Rich Quick and Taxman cards are always played.

Shuffle and deal ALL cards face down. On each deal, two players will have ten cards. The dealer rotates with each round.

Each player should decide silently, which set of cards to collect (this may change during the game) and then trade surplus cards.

The Dealer declares "the market open" and trading commences.

All players trade at the same lime. Players trade surplus cards (ie cards other than the ones they have decided to collect) by holding the cards face down on the table and shouting the number of cards they wish to trade, shouting the number as in "TWO, TWO, TWO" or "THREE, THREE THREE" but they must trade only cards of the one type e.g. 2 Diamonds, 3 Mining, etc.

'The Taxman' and 'Get Rich Quick' wild cards can be included as one of the cards in any group. Any number of cards from one upwards can be traded at any one time provided they are of the same type or include wild cards.

An exchange takes place when two players both declare equal numbers of cards to trade (eg Two" "two"). Trading must then take place. The faster you trade, the faster you win.

When a player has collected al of the one commodity ie 9 caids- this player wins the particular round and he/she calls out "GOLD" or "OIL... or 'THE NAME" of the set of cards they are ejecting and al trading must stop at that point.

The Player who calls out gets the value of the commodity added to his/her score.

The Get Rich Quick Gard

The Get Rich Quick card can be an asset or a liability and can be used as a wild card to complete a set ie 8 Diamonds + 'Get Rich Quick' card is a winning hand.

In each round, there will be two players with 10 cards in their hand. If one of these players collects all of a commodity plus the 'Get Rich Quick card his/her score is doubled.

The Taxman is never a wanted card. It is advisable to trade it immediately it comes into a player's possession. The player holding the Taxman card when play stops is fined $25 Million.

If there are six or more players, it is even more fun to play on the floor!

The first player to score $500 Milion wins the game. 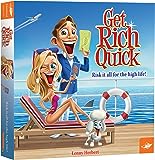