The new Chinese Emperor Wei Zu Yang is still too young to rule. His advisors hope to strengthen their influence throughout the imperial palace - better known as the Forbidden City.

In turn, the advisors place down room tiles in an attempt to close off the rooms when their influence is the biggest. To increase their power, they also need as many imperial dragons as possible on their side.

The advisor with the most influence in the Forbidden City wins this exciting game of power!

You are an advisor in the Imperial Temple of Wei Zu Yang and you want more power. That is why you try to earn as many Chinese coins as possible.

You do so by occupying rooms in the Forbidden City. But watch out, the other advisors plan to do exactly the same!

Place the double-sided start tile in the middle of the table. The front side with the garden in the corners is suitable for beginners. The other side is for advanced players, offering bigger rooms with an opportunity to earn more Chinese coins.

Put the Imperial Temple together and position it in the opening of the start tile. Place the Chinese coins within reach.

Each player takes 24 tiles of a particular color, shuffles them and places them in a face-down stack on the table in front of them. If you are playing the game with 2 players, use the purple and yellow tiles. That is because these colors have 6 extra tiles with the number 2 on them.

If you are playing the game with 3 or 4 players, you don't use the purple and yellow tiles marked with the number 2.

Each player then takes the top tile from his or her own stack and holds it in their hand without showing it to the other players. Walls are depicted on the tiles along with parts of rooms in three different colors (green, pink and white).

Some of the tiles show walls with archways. Other tiles show advisors in the color of the player or a dragon.

Green tile with 1 wall and 1 dragon

The game is played clockwise. The player who has at some point travelled (closest) to the Forbidden City in China starts the game. During your turn, you play the tile from your hand and place it face up on the table. The following rules apply here:

At the end of your turn, take a new tile from your stack and hold it in your hand without showing it to the other players.

A room is closed off if it is completely surrounded by walls (with or without archways).


The Value of a Room

If a room is closed off, you calculate its total value as follows:

If there are two or more players with the most advisors in the closed off room, each of these players is awarded half the total value. In this instance, the player with the second-most advisors receives nothing.

If there is a single player with the most advisors in a closed-off room, but there are two or more players with the second-most advisors, these players receive nothing. The players place their Chinese coins in front of them on the table.

The player who now has the highest amount in coins is the most powerful advisor of the Forbidden City and therefore wins the game! 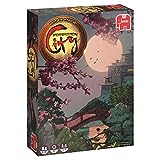