In Japan from 1603 until 1868, the Emperor's position was weak - and in his place, a Shogun of the Tokugawa clan ruled with a stern hand to ensure peace among the Daimyos.

The in- significant fishing village of Edo became the new seat of government and soon emerged as the most important city in Japan - a city known today as Tokyo.

In order to protect themselves from intrigue during this time, the Tokugawa clan required each Daimyo to take up residence in Edo while also spending a considerable portion of their wealth to develop this region.

The samurai are disarmed, and the best of them now serve their lords as stewards. If one does not question the Shogun's claim to power during these troubled times, a Daimyo may gain wide influence on other families...

Assuming the roles of Daimyos, the players build houses, trading posts, and castles to develop Edo and its surroundings.

They gain power points for building and trading during the game, and for money in hand and samurai on the game board at game's end.

The player with the most power points after the final scoring wins - provided he has built at least one house in Edo.

The game lasts several rounds, with each round consisting of 4 phases:

Each player starts the game with 3 authorization cards. Each card allows 4 different actions, and each card has a different selection of actions.


Simultaneously and secretly all players select 3 actions that they want to perform during this game round.

Players can select only 1 action on each of their cards. After having selected their actions, each player decides on the order in which they want to perform these actions.

They slide their cards into the slot of their planning board, from left to right and with the selected action pointing downwards.

In order to activate an action once, the player must place 1 official on his planning board facing that card. Depending on its type, each action can be activated up to 4 times by deploying the appropriate number of officials to it.

Note: If no official is assigned to a card, that action is skipped.

After all players have concluded their planning, advance to Phase 2.

The starting player reveals his 1st authorization card (the leftmost one) and performs that action. If a player activates an action more than once, he performs all of these actions in a row, without interruption.

Note: A player may forfeit one or more activated actions.

The actions in detail:

With their actions, the players gain resources, erect buildings, trade, recruit new officials, and place their samurai on the game board.

Some actions require only the assigned official(s) on the planning board, whereas other actions also require the presence of one of the player's samurai on a certain space of the game board. Each action indicates how often it can be activated.

A. Actions requiring only Officials:

To activate the following actions, a player needs only the officials assigned to that card on the player's planning board. Unless noted otherwise, each official assigned to an action activates it once (1x).


B. Actions requiring both officials and samurai:

In order to activate such an action, the player must assign 1 official to it on his planning board and must have 1 of his own samurai on a particular space of the game board.

To activate this action more than once, he must have a different samurai on the game board for each official assigned to this action. Depending on the location of his samurai, he can perform these actions in one or in several spaces.

Before revealing his authorization card, a player may move any number of his samurai on the game board. Samurai may move to spaces containing other samurai. The player must pay 1 Ryo to the common supply for each space that he moves a samurai.

There are 3 types of resources - wood, stone, and rice; each resource type has a corresponding action to produce it, as well as corresponding resource spaces on the game board.

To activate this action, the player must have one of his samurai on a corresponding resource space for each official on his planning board assigned to this action.

The fewer samurai that are on a space, whether his own or those of other players, the more resources the player receives.

Resource spaces on the game board:

The players keep their resources in front of them, visible to all players.

A player may never have more than 10 resources of a certain type at any one time.

To activate this action, the player must have one of his samurai in the city in which he wants to build for each official on his planning board assigned to this action.

This authorization card allows the player to perform the building action up to 4 times.

This authorization card allows the player to perform the building action up to 2 times, but the player must assign two officials for each samurai overseeing the construction.

A player may build his houses, his trading post and the shared fortresses.

In order to erect a building, a player must spend resources and money (see the chart at left). When building, he gains power points immediately.

Each city can accommodate 10 buildings. Each new building must be placed on the next free building space, in the direction of the arrow.

Only 1 trading post may be built in each city.

Exception: No trading post can be built in Edo.

At the end of the game, a player must have built at least 1 house in Edo in order to qualify for winning the game.

Trading allows players to exchange resources and power points based on the current merchant card.

To activate this action, the player must have one of his samurai on the merchant figure's current location for each official on his planning board assigned to this action.

Before revealing an authorization card, a player may move the merchant figure any number of spaces, paying 1 Ryo to the common supply for each space to which the merchant moves.

A player may move the merchant even if he does not want to trade with him.

If the merchant and the player's samurai are in a city containing that player's trading post, the player may receive resources and gain 1 power point with a single trade action.

If a player wants to activate the trading action 2x, they must have 2 samurais on the merchant's space as well as 2 officials assigned to this action on their planning board.

Note: The merchant's presence on a resource space does not affect the production of that resource.

Beginning with the starting player, each player has to decide for each of his samurai on the game board whether he wants to leave the figure in place or return it to his planning board to be used as an official next round.

For each samurai left on the game board, the samurai's owner must pay 1 rice to the common supply.

After the starting player has decided for all of his samurai, the other players follow in clockwise direction.

Each city with buildings provides income. If only 1 player has built in a city, he earns the entire profit.

If 2 or more players have built in a city, the profit is split among them based on their influence in that city.

The player controlling the most influence points in a city receives the largest share of the profit. The other players receive money according to their rank, in descending order.

In case of a tie, the tied player who built prior to the other tied player(s) has the higher influence. After all cities have been scored, advance to Phase 4.


Phase 4: Next Round or the End of the Game

Conditions: Check whether at least one player has gained 12 power points or more or whether the merchant card deck is exhausted.

If neither of these conditions has been met:

Prepare for the next game round

The players conclude the game with the final scoring:

If a player has no house built in Edo, he is eliminated from play and cannot win.

The player with the most power points wins.

In case of a tie for the most power points, the tied player owning the most combined resources (rice, wood, and stone) wins.

If this does not resolve the tie, the tied player with the highest influence in Edo wins. 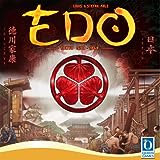 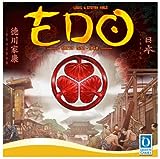