The Dragon Castle-the most ancient and important center of power in the Realm-is in decline, its power and influence have been fading for decades, but now that it has lost the favor of the mighty Eldest Dragon, the people are abandoning the city in search of a new home where they can live a long and prosperous life.

And you, the lords of the nearby realms, are more than eager to welcome them! It's your chance to get out from beneath the Dragon Castle's shadow and rise to power... But, can you earn the trust and support of the almighty Spirits? Can you gain the favor of the Eldest Dragon? Will you build the next Dragon Castle?

Dragon Castle is a game freely inspired by the traditional Chinese game, Mahjong. Pick tiles from the crumbling Dragon Castle and use them to build your own. Create sets of tiles of the same type and build Shrines on top of them to score points. Ask for the help of the Spirits and unleash their power. But beware, you'll have to please the requests of the Elder Dragon to grab victory!

1. Place the Central board corresponding to the number of players in the middle of the table and use all 116 tiles to build the Dragon Castle. All players should do this together. Shuffle all the tiles and place them face up on the Central board, using the castle layout you have chosen.

2. Place all of the Shrines and all of the Victory Point tokens (VP) next to the Central board. This will be the general pool.

3. Take all of the Countdown tokens and place them in a stack on the leftmost space of the Countdown track. Then, move 1 token from the top of the stack to each space on the right until you cover the one corresponding to the number of players.

For your first few games, to get confident with the basic rules, we recommend that you play without Spirit and Dragon cards (steps 4 and 5 of the Setup).

4. Shuffle the Dragon cards also, then randomly draw 1 Dragon card and place it next to the Central board so that it is easily visible to all players. This will be the bonus objective for this game. You can put the rest of the Dragon cards back in the box.

5. Shuffle the Spirit cards, then randomly draw 1 Spirit card and place it next to the Central board so that it is easily visible to all players. This will be the Spirit Power available for this game. You can put the rest of the Spirit cards back in the box.

7. The player who saw a Dragon most recently (the ones in this game do not count!) is the First Player and takes the First Player token. It will be used as a reminder during the final round, after the end of the game is triggered.

How To Build A Dragon Castle

The first thing you will always have to do before playing a game of Dragon Castle is... well, build the Dragon Castle! To make sure you have a pleasant and balanced game experience, at least for your first few games, we strongly recommend that you play with one of our basic setups. Place the Central board corresponding to the number of players in the middle of the table, where it's easily visible to all players, randomly shuffle all of the tiles, and follow the instructions for how to build the Dragon Castle. The example below is for a game with 4 players, but the process is similar for every kind of castle.

1. Lay out stacks of 3 random face-up tiles on the spaces marked with a 3.

2. Then, lay out stacks of 2 random face-up tiles on the spaces marked with a 2.

3. Finally, lay out single random face-up tiles on the spaces marked with a 1.

4. This is how your castle should look!

Feel Free To Make Your Own

Once you have some experience with the game, feel free to unleash your creativity and experiment with new castle builds! You can greatly alter the pace and feeling of each game by changing the layout of the Dragon Castle!

Whenever you pick a tile from the Dragon Castle, you MUST take an "Available" tile.

A tile is Available if at least 1 of its long sides is free, without having another tile adjacent to it on that side.


You don't need to commit to any one of the actions right away: the first thing to do is always to take an Available tile from the top floor of the Dragon Castle. Once you've done that, you can see what happens and choose how to complete your action.

Note: when you perform a "Pair of Tiles" action, the symbols on the two tiles must be exactly the same. Being the same color/type is not enough!

A game of Dragon Castle is played in turns. The players take their turns in clockwise order. During your turn, you MUST perform 1 of the available Actions. Then, you will place any tiles you have collected on your Realm board.

In addition, at any point during your turn, you MAY discard face-up tiles from your Realm or Shrines from your Shrine Pool to activate the Spirit Power.

During your turn, you must perform one Action, choosing one of the three options below:

Note: keep all the tiles you discard face down, next to your Realm board.

After you have completed your Action for the turn, you must place any tiles you have collected this turn wherever you want on your Realm board, face up. You can only place tiles on empty spaces and/or on top of face-down tiles.

On the other hand, you can never place tiles on top of face-up tiles, nor on face- down tiles where you have already placed a Shrine.

Note: You are not required to place your tiles adjacent to one another, even if in many cases it makes sense to do so.

Consolidating A Set Of Tiles

There are six types of tiles (see "Types of Tiles", to the right). After you have placed all of the tiles you collected on your turn, if you just created a set of at least 4 adjacent tiles of the same type, you MUST "Consolidate" them. When you Consolidate tiles, you must flip all of the Consolidated tiles face down.

When you Consolidate a set of tiles, you gain VPs depending on the number of tiles included in the set (see below). Take the earned VPs from the general pool and add them to your VP Pool, next to your Realm board.

Note: For each additional tile in excess of 8, you gain 1 additional VP.

There are six types of tiles:

When you Consolidate a set of tiles, if you have any Shrines in your Shrine Pool, you may build Shrines on top of one or more of tiles you just Consolidated.

At the end of the game, each Shrine in your Realm will be worth a certain number of points depending on the floor it is placed on! As we said, though, once you have placed a Shrine on a face-down tile you will not be able to place any more tiles on top of it.

There can never be more than 1 Shrine on each tile. Also, you cannot place Shrines on top of any face-down tiles you Consolidated during one of your previous turns-you must build the Shrine immediately after you Consolidate the tile you want to build it on top of.

After your first few games, when you feel confident with the basic rules of the game, you can start playing with Spirit and Dragon cards. However, we still recommend that you start with the "beginner" cards. They are marked with

Favor Of The Spirits

Note: it is not allowed pay the activation cost of a Spirit Power to get rid of a tile from your Realm without applying the effects of that Spirit Power.

The Dragon card shows you another way to gain points-if you build your castle in a way that is pleasing to the dragons. For example, building a symmetrical castle, or leaving certain tiles face up at the end of the game.

These bonus points are awarded, where applicable, after the end of the game. They can really help you get an edge over your opponents, so always keep them in mind when you build your castle!

To activate a Spirit Power you may either discard a face-up tile from your Realm...

.or discard a Shrine from your Shrine Pool.

When you feel really confident with the game, you can even try to play with more than 1 Spirit and/or Dragon card in play. More Spirits will give you more strategic options, while more Dragons, if you try to please them all, will offer you a more challenging game experience! Give it a try... if you dare.

If, at the beginning of any player's turn, the Dragon Castle only has tiles on the ground floor left, the end of the game is near. A new option is now available to all players: as an Action, any player may perform a "Summon the Dragon" Action.

Summon the Dragon: Take 1 token from the rightmost space of the Countdown track. Each token is worth 2 VPs at the end of the game.

You may still choose to perform any one of the "regular" Actions instead, of course. If there are no more tiles in the Dragon Castle, though, you MUST Summon the Dragon.

When the exclamation mark symbol is revealed on the Countdown track, the Eldest Dragon has been summoned, and the game will end soon (see "Triggering the Final Round", to the left). The game still continues with players taking turns until the player to the right of the First Player completes their next turn (so that all players will have played the same number of turns during the game).

Players may still perform the "Summon the Dragon" Action if they wish, drawing tokens from the stack remaining on the final space of the track.

After all players have completed their final turn, each player adds up the points they have earned from the VP tokens they collected, the Shrines they have built, the Countdown tokens they have collected (if any), and the Dragon card objective.

Triggering The Final Round

When the exclamation mark is revealed, the final round is triggered.

if there are no tiles you're interested in, but you don't want to make the end of the game nearer, you can still perform a "Discard Tile" Action. That way, you're still gaining points, but you're not pushing the game to its end! You may also use this action to remove a tile one of the other players needs! 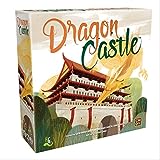