Doctor Who: Keys To The TARDIS Game Rules Massive disturbances within the Time Vortex have caused several time streams to overlap inside the TARDIS.

And now, several iterations of the Doctor ore loose on the TARDIS at the same time (it's ok, it's bigger on the inside). Now they hove to compete to escape their own TARDIS!

Be the first to cross the maze of TARDIS doors and reach the opposite edge.

Each player chooses a Doctor pawn and places it on the outside edge of the TARDIS grid, closest to them. Only one player can start on each edge. In a two player game, players start opposite one another.

Shuffle the cards and deal three cards to each player. The remaining cards create a draw pile.

The player which has most recently watched Doctor Who goes first.

Player 1 takes the top card from the card deck, to bring his/her hand up to 4 cards. Next, Player 1 chooses and plays a card from their hand (either into a discard pile or on a tile).

Finally, Player 1 has the option to move his/her pawn.

Once a player has moved, play continues clockwise around the table.

If the card deck ever gets depleted, simply shuffle the discards and start a new card deck.

The first player to move their pawn to any open door tile on the edge opposite their starting side wins!


"Do You Know What Thinking Is? It's Just A Fancy Word For Changing Your Mind".

"I'm being extremely clever up here and there is no one to stand around looking impressed. What's the point in having you all?" 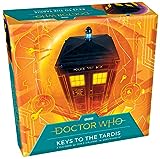 Doctor Who: Keys To The TARDIS