Adopt the most dogs by matching what the dogs are wishing for to the cards in your hand.

Place all dogs in the middle of the table. Shuffle the cards and deal two face-down to each player. Place the remaining cards face-down as a draw pile.

The youngest player goes first and play continues to the left.

On your turn, you:


Asking for a Card

Check to see if you have a match

If you match all three items that a dog wants, you show the three matching item cards and say "Bow Wow!"

If you don't have a match, your turn is over.

Running out of Cards


The Stars of the Game

Maggie has the sweetest personality ever! Her favorite toy is her Kong Ball and she loves playing fetch.

She likes to cuddle and at 85 pounds, she is one big cuddle-bug.

Mini's owner, Debbie, saw a picture of her on a local shelter's website and noticed that she looked exactly like her last dog.

When they met in person at the shelter, Mini put her paws on Debbie's shoulders to give her a hug, and at that moment Debbie felt like Mini adopted HER.

They've been best friends ever since! Mini is funny and sweet and has tons of friends-dog and human alike.

Chloe is the gentlest and most patient dog her owner has ever had. She loves everyone.

Her favorite things to do are snuggling in your lap and eating. She will do anything for a treat!

Whiskey is a fun-loving boy who loves to play with kids and go swimming in the lake.

He's in training to compete in obedience and agility. He's also working on becoming a certified therapy dog.

He's currently competing in conformation, working toward his Champion title.

Lola is a mischievous puppy from Massachusetts who gets into everything! Lola has a favorite stuffed elephant that she sleeps with every night.

She loves to go swimming and loves eating vanilla icecream!

Junior loves to get massaged in the morning. His favorite food is spaghetti, and his favorite snack is a carrot.

He'll hold it between his paws and take bites out of it. He loves all his stuffed animals especially a frog that he throws in the air and catches in his mouth or his paws.

Hank, this game's inventor, loves his dog Tallulah. Tallulah is very timid and jumps in the bathtub when it thunders.

She is very suspicious of unfamiliar large objects brought into the house. She loves to go for rides in the car.

When playing fetch, she'll run after a ball but won't bring it back. She's very lovable and likes attention.

You can add your dog to the game by printing out a picture and placing it over one of the existing dogs.

Use some tape to hold the picture in place. Make sure that the wished for items can still be seen. Those are essential elements in the game.

When all the dogs have found a home, the game is over. The winner is the player with the most dogs! 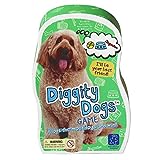