You're somewhere in the Wild Wild American West... Picture a gold mine and beautiful fields, perfect for raising cattle... a place that attracts pioneers like bears to honey. A small town has sprung up overnight in the middle of these promising lands. T

he question is, who's going to own the town when all is said and done? Well partner, if you haven't got lead in your feet and aren't afraid of taking a little lead in your body, this is your chance to stake your claim or leave the table!!!

Become the most influential hero in Dice Town, by accumulating gold, dollars, property claims and accessories...

Set up the various game items as shown below:

(For games with less than 5 players, all unused items are put back in the box)

2 v Shuffle the Property Claims cards. Make a draw placed face down, and then draw and turn over the first 3 cards.

4 Place the 30 gold Nuggets on the Gold Mine.

6 The youngest player receives the Sheriff's Badge card and put it on the card stand.

A game consists of a series of rounds during which each player will:


I. Putting Together A 5 Dice Hand

Simultaneously, the players each shake their 5 dice in their cup. The cups are fl ipped over towards the table keeping the dice hidden.

Then, the players each secretly look under their cup, keeping one (and only one) die under the cup, and taking the other dice into their hands.

The players then lift up their cups simultaneously, revealing the die they kept for all to see.

The same thing is done with the remaining dice starting with step 1, having placed the kept die aside, and adding a new die to it...

This process is continued, until each player has built in front of them a Poker hand of 5 dice.

But It Is Possible, By Spending A Few Dollars, To Build A Better Hand:

But it is possible, by spending a few dollars, to build a better hand:

Players may want to keep more than one of their dice during a roll.

In the following example, the player wants to keep 4 dice, because he rolled a 4 of a kind in Queens)...

A player leaves all the kept dice under the cup, and picks up the remaining ones.

Here, he has kept 4 dice under the cup and picks up the remaining die.

When the player lifts up the cup to reveal the kept dice, $1 per kept die is paid immediately for every die over the fi rst one! (in this case $3) Dollars Bills spent in this manner are placed on the Stagecoach.

Note: it is also allowed, after a roll, to not keep any die under a player's cup... This action also costs$1, and it is placed on the Stagecoach.


Often, players having paid for dice finish their Poker Hand before the other players:

(Note: a same player may make more than one action during a same round. It is also possible, that a place is not attributed to anyone depending on the Poker Hands obtained. In case of a tie, the current Sheriff decides, see under 6).

Once the players have shown their Poker Hands, the following actions, according to who won the various places, are resolved in the following order:


End of a Game Round

Once all the actions have been resolved, the players pick up their five dice, and head to the next round...

And so it goes, again and again, until one of the following end game conditions have been obtained:

The players count up their Victory Points (VP) in the following manner:

The player with the highest total is declared the winner. 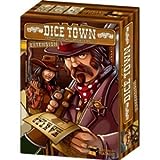