Diamant takes you on an expedition in the Tacora Cave, known for its diamonds... but also for its formidable traps! Venture to the depths of the cave and decide, step after step, to follow your path or return prudently to the camp to safeguard your treasures.

Explore the Tacora Cave with careful steps, guided by the light coming from your torches. Each time you go deeper, discover a new room and gather the diamonds found in your path.

Then decide if you want to return to camp to store your treasures, or if you prefer to continue your expedition towards the depths of the cave... and unknown perils!

If you fall into a trap, you will flee towards the exit, leaving all of your treasures behind you, and return to camp empty-handed. and with shaking knees!

Venture deep into the Tacora Cave and gather as many diamonds as possible. Be clever enough either to return to camp before falling into a trap, or to gather all the diamonds that are left on the path.

Whoever has the most diamonds in their chest at the end of the game wins!

The game board represents your camp, connected to each of the entrances to the Tacora Cave by five paths. Each entrance corresponds to a round of the game.

Precious Stones are represented by Rubies worth 1 point and Diamonds worth 5. Only Rubies can be found in the cave, but you can exchange five Rubies for one Diamond at any time.

Expedition Cards show you what you discover each time you go deeper into the Tacora Cave.

They come in three types:

Decision Cards allow you to show other players if you want to go deeper into the cave or return to camp.

Barricade Tiles allow you to follow the progression of the game. They are numbered 1 to 5 and close the entrances to the Tacora Cave, one after the other, after each round.

Chests are a safe place where you can store your Diamonds when you return to camp before falling into a trap in the Tacora Cave. All the Rubies and Diamonds in your Chest are safe until the end of the game.

The game plays over 5 rounds corresponding to the 5 cave entrances. Each round consists of each player deciding to either advance into the cave or return to camp.


A. Advance Into The Cave

Flip the top Expedition card of the deck and put it in the middle of the table face-up.

Take as many Precious Stones from the reserve as there are Rubies on the card. Share these Rubies equally with all players still in the cave. Put the remaining Rubies on the Treasure card.

Example: In a 5-player game, you reveal a Treasure card with 9 Rubies. Each player puts 1 of these Rubies next to their Chest, and the 4 remaining Rubies are put on the Treasure card.


Rubies that you gather during the Expedition are put next to your Chest and can be lost. It's only when you return prudently (or shamefully) to camp that you can put your Precious Stones safely in your Chest.

If a trap appears for the first time since you entered the cave, nothing happens and the expedition continues. However, if the same trap is revealed a second time, all players in the cave immediately return to camp empty- handed. One of the two identical

Trap cards is removed from the game, and the other is put back in the Expedition card deck. The expedition ends immediately.

Example: When the first Trap card - a Snake - is revealed, nothing happens and the expedition continues.

Later in the same round, when a second Snake card is revealed, all explorers in the cave take off running, abandoning their treasures, and the expedition ends.

The Relic card stays on the cave path and nothing happens. Go directly to the "Players' Decision" Phase. The card isn't worth any points until a player leaves the cave with the card in their possession.

Before a new Expedition card is revealed, each player still in the cave must decide to continue the expedition and delve deeper into the cave, or to return to camp to put their Precious Stones safely in their Chest.

To do this, take your two Decision cards: Continue and Exit. Choose one and place it in front of yourself face-down. When everyone is ready, simultaneously reveal your cards.

Continue: you continue the expedition to try to gather more treasure.

Exit: you return to camp and proceed as follows:

Once all players have made a decision, reveal a new Expedition card and lengthen the path into the cave.

An expedition ends when all players return to camp or when the same Trap appears twice in the cave.

Continue to the next round:

A new round begins by flipping over the top card of the Expedition deck.

The game ends when the last Barricade tile is placed on the fifth cave entrance.

Each player counts the Precious Stones they put in their Chest, as well as those on the Relic cards they gathered, and converts them into victory points:

The player with the highest score is declared the winner.

In case of tie, the tied players share the victory. 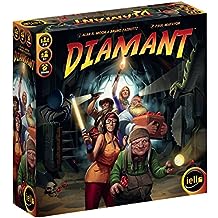