Each Dare card has an action that a player must complete in order to earn the points at the bottom left corner of the card.

Dare cards are worth between 1 and 5 points, depending on the level of difficulty of the dare.

Every player should have 5 Dare cards in hand at all times. Whenever you play or discard a Dare card, draw a new one immediately.

If a Dare card has a

it printed on it, challengers are welcome!

Any player (with the exception of the Judge) can choose to perform the dare.

The Judge picks the player who performed the dare best, and that player gets the points!

A Modifier card is flipped over each round, and its text is added to the instructions of the Dare card selected that round.

If the Judge decides you didn't successfully complete a dare (or if you back out), you must take a Penalty card.

Penalty cards are effective immediately and last until you successfully complete another dare.


If you really suck, you might have multiple active Penalty cards. If you take a Penalty card that conflicts with an active one, put the new card on the bottom of the deck and take a different Penalty card instead.

Each round, one player acts as Judge. The Judge turns over the Modifier card for that round, chooses which dare will be performed, and decides if the dare was adequately completed.

At the beginning of the game, each player draws one Dare card. The player whose card is worth the most points is the Judge for the first round. If there's a tie, the fed players repeat this process until there are no longer any ties. Return the cards to the deck and shuffle.


"Of the Judge's Choosing"

Some cards require the Judge to choose something. It is the Judge's responsibility to pick something reasonable and safe.

This is not a joke. After all, if all your friends get maimed while performing dares, who will you play with?

The Judge's word is law. Don't argue with their decisions. If they're being a dick, settle your differences with a slap fight. Or just don't play with them again. Whatever.

If you're the Judge, don't be a dick. Take the responsibility seriously and make decisions that are fair to all players. Otherwise, no one will play with you again.

We are not responsible for any physical or emotional injury sustained while playing Daring Contest. Make good choices.

The round begins when the Judge flips over the top card of the Modifier stack.

The player who submitted that card must now make a choice:


If a player performs the dare, the Judge decides if that player met the requirements. If the player successfully completed the dare according to the Judge, the player earns the points on the Dare card and should hang on to the card to tally the score later.

If not, the player gets no points, discards the Dare card, and takes a Penalty card. Either way. that player is the Judge for the next round. Rinse and repeat.

After 10 rounds, the Modifier stack will be empty and the game is over. The player with the most points wins!

If 2 or more players have the same number of points at the end of the game, a Dare Deathmatch begins!

Flip over Dare cards from the top of the deck until you find a Challenge Dare card. If the Dare card involves a Judge, ignore it and find another. The bed players must all perform that dare, and the rest of the players vote on the winner.

If a bed player backs down from the dare, they forfeit. If the votes are tied, keep arguing until someone wins. You'll figure it out. We're all just here to have fun, right?

Note: No one should actually die in a Dare Deathmatch.

Some dares may require social media and/or texting. During these dares, the player is not allowed to provide context to outside parties.

If you draw a Dare card you don't think can possibly be performed in your current setting, you can show it to the rest of the players, then discard it and draw a new Dare card.

If all other players agree that the dare would be impossible to perform, you're good to go! If any player is able to prove that the dare can be performed, however, you must take a Penalty card.

Filming or taking pictures during the game is strictly prohibited unless all players consent. If a dare requires a photo, video, or social post, any person involved or shown must give express consent.

Be courteous and respect the privacy of other players. Who knows? Maybe you'll get to see them shirtless.

If you find yourself feeling extra daring, you can play the game in Expert Mode. In this version of the game, each player starts with a Penalty card.

That player must perform the action listed on the Penalty card at all times (except when performing a dare).

Each time a player successfully performs a dare, that player discards the Penalty card and takes a new one. 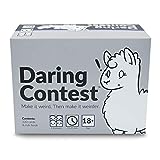 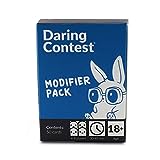