The first time you play, carefully detach all of the cardboard Terrains and tokens.

Place the gameboard in the middle of the table. The central portion represents the Cuzco site; it comprises 150 empty hexes and 3 Irrigation Pond hexes. Cuzco is entirely surrounded, half by forest, and half by mountain.

Each player chooses a color and places the Prestige marker of that color on space 0 of the Score Track that circles the board.

Place the triple Terrains, the Irrigation Ponds, the Solar Discs, and the Temple floors (according to their value) beside the board.

Place 1 Irrigation Pond on each of the 3 Ponds printed on the gameboard.

For a 2- or 3-player game, leave everything else in the box (including the other single and double Terrains, but not the Ponds!).

Randomly determine the first player. You will take turns in clockwise order. On your turn, you must place at least one Terrain. This may enlarge or reduce the sizes of Villages, Cities, and Crops already placed.

Then you can place other Terrains, bring your Incas into and out of the Cuzco site or move them within it, build or expand Temples, set up Irrigation Ponds, and propose organizing a Festival.

Each of these actions (including the mandatory placement of Terrain at the beginning of your turn) costs a certain number of the 6 Action Points (AP) at your disposal each turn (any Action Points you do not use are wasted).

In a single turn, you can repeat an action as many times as you wish (as long as the rules allow it) and performyour your actions in any order; however, you must start by placing a Terrain, and you can only propose organizing a Festival at the end of your turn.

The player(s) who play the most Festival Points (FP), by discarding cards depicting the required Relics, will organize the Festival. Certain actions immediately earn you Prestige Points (PP), which will advance your Prestige marker on the Score Track.

However, you will score most of your PP in the Grand Final Scoring.

Each player has 3 Additional Action tokens. You can use 1 of your tokens to have 7 AP on your turn instead of just 6 AP. When you do this, remove the token from the game. You can only use 1 token per turn.

The Actions in Detail

You must begin your turn by choosing a single, double, or triple Terrain tile (singles and doubles come from your personal supply; triples come from the common supply). For 1 Action Point (1 AP), you must place it either directly on the Cuzco site (gameboard) or atop Terrains already in play, respecting the following rules:

You can place a Terrain on whichever hex(es) you wish; however, you cannot cover a Pond or a hex with an Inca or a Temple in it.

This Terrain does not need to be placed adjacent to another Terrain already on the board.

It is possible to form Terraces out of the Terrains by superimposing them. You can place this Terrain atop other Terrains under the following conditions:


A double or triple Terrain can overflow the hexes of the Cuzco site under the following conditions:

Important: Although the overflow placement rule can be used at any time, it is especially useful toward the end of the game, when it becomes difficult to place a Terrain. Placing Terrain atop Terrains that are already overflowing does not require additional AP.

In addition to the mandatory first placement, you are welcome to place one or more other Terrains at any time on your turn, as long as you have enough AP to do so.

You can move Incas as follows:

An Inca at the border of the Cuzco site can enter play in, or leave from any Crop or Village/City hex along that border. Entering or leaving through the forest costs 1 AP; through the mountain costs 2 AP.

Incas can move for free as many hexes as you wish on the same type of Terrain (even if they climb up or down the Terraces); this costs 0 AP.

Each move that results in changing Terrain type (Crop to Village/City, or vice versa) costs 1 AP. Incas can only move on Terrains, never on empty hexes, Temples, or Ponds.

Building or expanding a Temple

Building or expanding a Temple earns you Prestige Points (PP).

Important : If nobody occupies the highest position, nobody can build or expand a Temple. Being tied is not sufficient!

A Temple can only be built on an empty Village hex (with no Inca in it). The elevation of the hex does not matter. The presence of a Temple transforms the Village into a City.

A City can only have one Temple. A Temple cannot be expanded beyond value 10 (this is the highest floor available). When you build/expand a Temple, its value must be less than or equal to the number of hexes composing the Village/City.

Important : A Temple does not have to start at value 2. Its value could be higher if the Village already comprises enough hexes. For example, if the Village is already 4 or 5 hexes, you could directly build a value-4 Temple (by stacking a value-4 floor atop a value-2 floor right away), which still costs only 1 AP.

In the same way, a Temple can be upgraded directly from 4 to 8 if the City comprises 8 or 9 hexes (including the Temple), by adding both floors 6 and 8 for a total of only 1 AP.

When you expand a Temple, stack the new floor(s) atop the existing one(s). They cannot be removed. You cannot connect two Cities; however, you can connect a City to one or more Villages, making it possible to expand the Temple.

When you build or expand a Temple, immediately advance your Prestige marker half the new value of the Temple on the Score Track.

Important: A Temple makes the hex on which it is built holy. Incas can no longer traverse (nor stop on) that hex.

Important: When you are covering hexes while superimposing Terrains, it is possible that you shrink a City or cut it in two. This does not change the value of its Temple. If the City is cut, the part without a Temple once again becomes a Village, which can accommodate a new Temple.

Setting Up an Irrigation Pond

Ponds only earn PP if they are completely surrounded by Terrain tiles.

When you take a Pond from the general supply for 1 AP, you must place it directly on an empty hex of the board, never on a Terrain.

As soon as a Pond (comprising one or more adjacent Pond tiles) is entirely surrounded by Terrain tiles, immediately check who occupies the highest position on the Terrain hexes directly adjacent to the Pond (regardless of whether they are on Crops, Villages, or Cities); the ranking and tiebreaker rules are the same as in "Building or Expanding a Temple". For each hex of the Pond, that player immediately earns 3 PP

If no one occupies a higher position than the others (perfect tie, or there are no Incas around the Pond), nobody earns PP for this Pond.

If a single empty hex between Terrains remains on the board, you are still welcome to set up a Pond in it for 1 AP. Because it is already surrounded, award the PP immediately, as explained above.

You may draw a maximum of 2 Festival cards on your turn for 1 AP each. For each draw, choose one of the following:

Keep your cards secret from the other players.

At the end of your turn, if you wish, for 0 AP you can propose organizing a Festival in a City in which you have at least one Inca.

The other players who have Incas in the City can decide to participate in the Festival. The interested players will compete with their Festival cards, each of which depicts 1 or 2 Relics.

The face-up Festival card on top of the discard indicates the type(s) of Relic you must present to participate:

Other Relics depicted on the cards you play do not count. Each Relic matching the face-up card on top of the discard is worth 1 Festival Point (FP).

Because you proposed organizing the Festival, you are first to play one or more appropriate Festival cards face-up in front of you. There are two possibilities:

If there is a tie, and none of the participants can play another Festival card, the agreement is automatic.

All cards the participants played are discarded, even if they dropped out of the bidding early. Place these cards face up on the discard beside the deck. Flip the top card of the deck face up atop the discard to indicate the Relic(s) required for the next Festival.

After the Festival has been organized (and the organizers have scored their PP), place a Solar Disc atop the Temple to indicate that no new Festival can be organized there until the Temple has been expanded again. When the Temple is expanded, immediately remove the Solar Disc.

Important : You are not required to have built or expanded the City's Temple in order to participate in the Festival. You merely must have an Inca in the City.

For your Grand Final Scoring, proceed Temple by Temple. For each Temple, you score PP if you hold 1st or 2nd position in the City:

So, he holds 1 st place and scores 10 PP. If nothing else changes by the ends of their turns, players A and C will be tied for 2nd place, and each will score 5 PP during their Grand Final Scoring.

Player C may very well use her final turn to move an Inca to seize 1 st place in this City, so she can score 10 PP

To indicate that you have already scored your PP for a Temple, lay your Incas in the City down. This ensures that you won't forget a Temple and that you won't score one twice

Even after you have performed your own Grand Final Scoring, you can still participate in organizing a Festival and thus still score PP.

After each player in turn has completed their Grand Final Scoring, the game is over.

The player with the most Prestige Points on the Score Track wins, and becomes the new Emperor.

If it is a tie, you share the throne.

Tip: Over the course of the game, never lose sight of your Grand Final Scoring. Make sure that, early enough, you occupy the highest level in as many Cities as possible.

You must also manage your supply of single and double Terrains, because these can be decisive in the final round, just before your Grand Final Scoring.


Attention: If you wish to build or expand a Temple, but there are no more of the floor of the necessary value, you cannot perform that action. 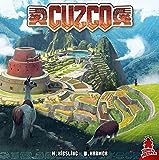