Experienced players looking to diversify their decks right at the start of the game should introduce the "Sector 0" pregame draft cards during set-up. Here is how they work: 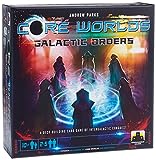